by Mihai Andrei
in Nanotechnology, Studies
Reading Time: 2 mins read
A A
Share on FacebookShare on TwitterSubmit to Reddit 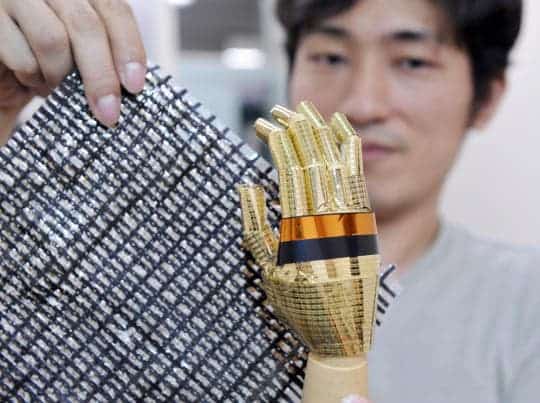 Robotics is developing faster and faster, partially thanks to the technological growth of Japan, which has quite some awesome plans for the not so distant future. This time however, it’s a team of researchers from University of California, Berkeley, led by Ali Javey that is in the spotlight.

You see, it’s not the strength that today’s robots are lacking, it’s the finesse. In order for one to do a relatively delicate task, researchers say, it would require “skin” – that is, pressure sensitive technology that would allow it to estimate the amount of power needed. The team I was telling you earlier about is working on just that.

Nicknamed “e-skin”, this technology is made of hair-thin miniaturized strips of low-voltage nanowire transistors constructed from inorganic materials.

“The idea is to have a material that functions like the human skin, which means incorporating the ability to feel and touch objects,” Javey said in a news release .

Using an innovative fabrication technique, they practically rolled and printed the nanowires onto bendable sheets of poylimide film. The end result was an artificial skin that runs on low amounts of electricity and can detect a range of pressures varying from the pressure required to type, to lifting a heavier object. Scientists hope that in turn, this technology will help develop prosthetic limbs, but this would require other advancements as well. Until then, the team will continue to work on this technology.

“It’s a technique that can be potentially scaled up,” post-doctoral fellow and study lead author Kuniharu Takei said in the release. “The limit now to the size of the e-skin we developed is the size of the processing tools we are using.”