The Turtle and the Robot

The guys over at WHOI are doing more and more interesting things every day; just a few days ago I wrote about Noah’s ark debate and guess what: they’re in the highlights today also. This time it’s with an underwater robot developed by Stephen Licht, named Finnegan (after a James Joyce comic, Finnegan’s wake) because he was especially interested in watching the robot’s wake under water. But what’s special about this robot is the propelling system; instead of the usual mechanisms, they went for what is called “flapping foils”, four flippers that roll and twist under water. This gives a much needed ability to make swifter changes of direction and avoid obstacles in a nasty environment with many obstacles. So as Leonardo da Vinci learned from animals, WHOI researchers did the same thing, learning from turtles.

But Licht underlines the fact that learning is very different from immitating.

“If you look at turtles, for instance, you’ll notice that they have much more strength sweeping their flippers under their bodies than pulling them up,” he said. “At first, you might think, ‘Maybe there’s some fundamental swimming property here—that in order to swim like a turtle, you must be stronger on the downstroke than the upstroke.’

“But you just have to understand that turtles have very different survival requirements than underwater vehicles. And one of the reasons that they need this strong downstroke is that they need to be able to pull themselves up the beach in order to breed. Robots don’t need to breed; we build them from scratch.”

So they had to go to an expert, and they went to somebody who knows the drill and has all the skills required for underwater living; her name is Myrtle. With 200 million years of evolution and 70 years of experience, Myrtle was precisely what they needed; she is also about the same size and weight (about 500 pounds).

Licht said, “I called Sherrie Floyd, the chief aquarist at the New England Aquarium, and said, ‘I want to do some research with one of your endangered green sea turtles,’ and her first question was, ‘Well, are you a certified diver?’ And I thought, ‘OK, I’m in! This is going to be fun.’

Of course, we still have a long way to go until we reach the abilities of dolphins, seal, fish and turtles but we can learn a lot from then and make AUVs (autonomic underwater vehicles) more and more maneuvrable.

“When we look around and see the astounding capabilities of animals in nature,” he said, “we see that they have really incredible abilities that we can’t even approach with man-made underwater vehicles.”

Licht had quite some amazing scientists as his mentors, in the person of MIT professors Michael Triantafyllou and Franz Hover and the field they specialized in is called biomimetic robotics. As you could guess, the aim is to understand nature’s way to solving problems and apply what we learn.

“In this case, what we’re really looking at is dynamic, unpredictable flows—like the surf zone, like around obstacles, or in waves,” he said.

Of course, an AUV that’s the shape of a torpedo is hard to steer, as were the ones previously designed; the point was just to go from one place to another, without taking into consideration inherent problems that may arise. The good thing is there’s different things to learn from different beings.

“If you look at the way animals use their bodies, they are extremely comfortable—in fact, usually more comfortable—being near obstacles and dynamic flows,” Licht said.

They examples they pointed out made it very clear to understand what it is that we can learn: “Small fish dart into coral reef holes to escape predators. Salmon and trout synchronize their bodies to the flow behind rocks to conserve energy as they swim upriver to spawn. Dolphins surf on the bow waves of huge supertankers that could easily crush them.”

As it turns out and it was easy to guess, the key to biometrics is understanding the underlying physics. In this case, it was about the foils that sweep through the water and as they do that, they generate tiny tornadoes. The vortex created has certain characteristics that define it, and some vortex patterns are very effective, while others are practically inefficient (details here).

“You can come up with some very basic characteristics of the wakes that make it relatively easy to predict whether you’re going to get efficient motion, efficient swimming, efficient thrust, and effective maneuvering capabilities out of them,” Licht said.

With whatever knowledge he had already acquired, he took his robot out for a swim.

“It’s always fun to see what you created actually do what you created it to do,” he said. “At first, you just want to make sure that it can swim in a straight line, and that it’s not going to leak, and it’s not going to explode. The next time you go in, you want to make sure it can turn in circles. And by the end of it, two or three years later, you’re doing maneuvers. Each time you go in there something might go wrong, but something great might happen.”

Myrtle helped them quite a lot, and it turns out if you give her lettuce, she’ll take you wherever you want and swim however you want. She was also the key to finding the answers to their questions and pointed out what they were doing wrong.

“We’d run Finnegan up to a meter and a half per second (3 knots, full speed) and aim it at the wall and basically two body lengths away, we would turn it on its side and do a banked turn.” 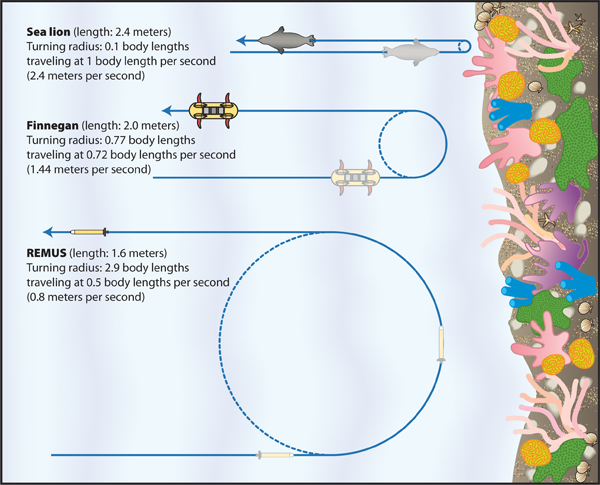 That’s really an amazing achievement and a big leap forward, but they’re still not ready for the ocean. For once, the salt from the water would cause a lot of damage by corosion and if there was a problem or something, Finnegan would be in huge trouble because there would be no way to get him back up. A lot needs to be done, but also, a lot has been done.