by Mihai Andrei
in Inventions, Technology
Reading Time: 2 mins read
A A
Share on FacebookShare on TwitterSubmit to Reddit

A seemingly ordinary starfish robot created by scientists at Harvard has pushed the frontiers of robotics one step further by showing that it can wiggle. 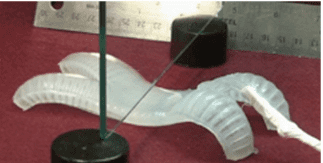 The soft bodied mechanism was inspired by squids, worms and starfish, and is built out of elastomers and powered by pneumatics – a cheap and effective mechanism; it has every chance of becoming extremely important in finding survivors after natural disasters such as earthquakes, and generally speaking, wherever penetrating tight spaces is required.

“These organisms, ones without internal skeletons, suggest designs that are simpler to make and are less expensive than conventional hard robots, and that may, in some respects, be more capable of complex motions and functions,” says the team which developed this robot.

Another advantage of this kind of robot is its resistance to breaking and falling, but the downside is that it is more prone to puncture its soft-walled air chambers. It can also cover different surfaces, from hard rugged gravel to Jell-o – it has been tested and it works fine. In a published demonstration, it was able to make its way under a suspended glass plate in less than a minute. The paper was published in PNAS.