by Tibi Puiu
in Research, Robotics, Technology
A A

Most of the robots we’ve featured on ZME Science are more or less humanoid in their characteristic. Either they can see in the same manner human eyes do or, most commonly, feature articulations, say hands, very similar to those of a human. Human hands are incredibly complex, allowing for very highly sensitive manipulation of objects  – a treat engineers have always tried to replicate as closely as possible. A few high-end models manage to emulate the human hand incredible well, but they’re extremely difficult to develop, and very expensive to make, of course. Engineers at Cornell University and the University of Chicago have taken a different approach to replicating the precision of the human hand’s gripping and throwing abilities, one that proves to be a lot cheaper and in some situations, just as useful.

The robotic arm’s vital piece is a sort of balloon filled with sand, or a membrane filled with a mass of granular material as the scientists involved in the project refer to it, connected to a compressor and vacuum.  When the robot wants to pick up an object, it just needs to position its tip towards it and then the vacuum kicks in, sucking the object within its grasp and holding it firmly. When the object needs to be thrown, the revers takes place – the compressor pumps air into the “balloon hand”, causing the robot hand to loose its grip and effectively shoot objects up to a meter in front of it.

“The typical approach for designing a universal robot gripper is to take inspiration from the human hand,” the team explains in an FAQ. “These mechanical human-like robot hands are often incredible machines, but they are also complex and expensive.

“Our approach is a sharp deviation from the human-inspired approach, and it proves to be simple, low cost, and still highly capable.”

I was surprised to witness how the robot hand, despite having no kind of mechanical fingers or any kind of articulations, was able to shoots hoops, throw bolts or springs into their respective recipients, even consecutively throw three darts right in the bull’s-eye with extreme accuracy. 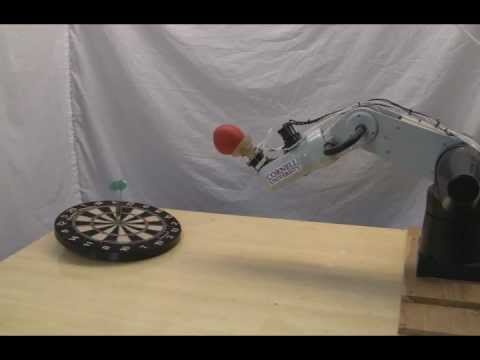 The researchers see a number of applications for such a robotic hand configuration, including handling explosive devices or manufacturing where the ability to handle a diverse range of shapes could prove invaluable. Of course, it’s also a much cheaper design, since it’s less complex.