Robots learn to self-replicate and evolve

A robotics team lead by Cambridge University engineer Fumiya Iida have designed a robot that archeologists of the future (they will all be robots) will recognize as the moment the machines started to take over. They built a "mother" device that can create smaller, "baby" robots, and programed it (her?) so that experience obtained building them would be used to improve upon further generations.

by Alexandru Micu
in News, Robotics, Videos
Reading Time: 2 mins read
A A

A robotics team led by University of Cambridge engineer Fumiya Iida has designed a robot that archeologists of the future (they will all be robots) will recognize as the moment the machines started to take over. They built a “mother” device that can create smaller, “baby” robots, and programed it (her?) so that experience obtained building them would be used to improve upon further generations. 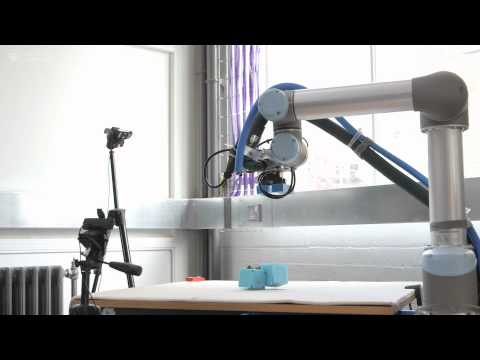 The arm-shaped mother robot built sets of 10 adorable, blue cube-shaped children, then analyzed their performance so the basic design of the most successful of the litter would be used and improved upon in the next set. To determine which of the robots was “the fittest”, the mother measured how far each of its babies could travel from its starting position in a given amount of time.

And while speed is the only trait analyzed by the mother robot, it sets a precedent for robotic evolution. The team used a single trait to base the evolution of its robotic species upon to streamline the experiment and allow for easily observable progress: if generation 2 is faster than generation 1, the robots were successful, and evolution was achieved.

Most of the research into the field of evolutionary robotics done today relies on computer simulation, letting a program complete millions of designs virtually. However there are always “reality gaps” between the laws of a simulated environment and the real world. The team wanted to see if any variations existed between a virtual and a real robot, and it turns out there is: letting the robot decide on its own resulted in more successful designs.

“One of the big questions in biology is how intelligence came about—we’re using robotics to explore this mystery,” Iida said. “We think of robots as performing repetitive tasks, and they’re typically designed for mass production instead of mass customization, but we want to see robots that are capable of innovation and creativity.”

The experiment is part of Iida’s ongoing work on improving the way robots move, and part of a larger trend in robotics that looks to nature for cues on how to design a successful robot. And even though the team obtained splendid results with their experiment, Iida thinks we’re still decades away from human-shaped robots.

“It’s still a long way to go before we’ll have robots that look, act, and think like us,” Iida said. “But what we do have are a lot of enabling technologies that will help us import some aspects of biology to the engineering world.”

The team published the results of their research in the journal Plos One.