The beginning of the end for antibacterial soaps?

by livia rusu
in Health & Medicine, News
A A

There is very little evidence that anti-bacterial ingredients used in common soaps actually do anything in the long run to fight bacteria – compared to regular soaps. There is however, lots of evidence that they are breeding a new generation of “superbugs” – pathogens which develop resistance to drugs. Basically, reckless use of antibacterial substances and antibiotics is “training” pathogens, which become more and more dangerous. But that might change in the near future. 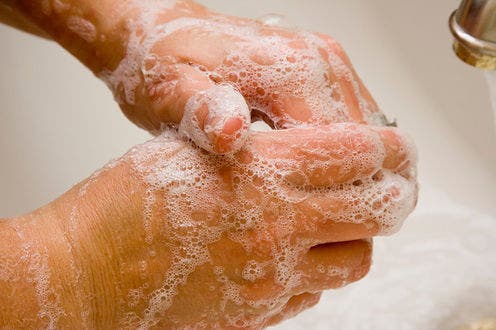 Triclosan is a potent antibacterial agent able to kill most types of bacteria, both healthy and disease-causing ones. It is commonly used in hospitals, where it likely saved millions of lives from infection. However, it is also used in smaller concentrations for numerous household cleaning products, including antibacterial soaps an pesticides. When bacteria are exposed to low doses of Triclosan (as with any other antibacterial substance), they will use as much energy as possible to protect themselves from the threat; if the dose is low enough, they can succeed – and you end up with a much more resilient “breed” of bacteria. What doesn’t kill them makes them stronger.

Recently, the US Food and Drug Administration (FDA) and the US Environmental Protection Agency (EPA) co-announced they were taking a closer look at how Triclosan is used, in an attempt to limit its use in households and pesticides. There is, as I said, little to no evidence that Triclosan actually has a better effect than its conventional alternatives. The exception here are toothpastes – which have proven to be more effective against gingivitis.

The state of Minnesota has already placed a ban on the substance which will come into effect in 2017, and Johnson & Johnson, Procter & Gamble and Avon have committed to phasing Triclosan out of all their products by 2015. It seems that finally, authorities have started to acknowledge the seriousness of the drug-resistant microbes situation. However, this is just a substance, and it has several other alternatives – but it’s a start.

But we all have to play our part. Avoid reckless usage of antibiotics and antibacterial cleaning products, and stick to regular soap – which is extremely effective as it is.