Low level of antibiotics cause drug resistance in ‘superbugs’

For years and years (good) doctors have warned about the dangers of taking antibiotics too lightly, which generally causes ‘bugs’ to be more resistant. More recently, a study conducted by researchers from Boston University showed that microbes are a lot like us: what doesn’t kill them makes them stronger, and this could have extreme consequences. Here’s what it’s about.

You’re sick, you go to the doctor, he gives you a prescription. You start taking it, after a couple of days feel all better, and stop taking it. The result is likely a strain of bacteria (or virus) that will be resistant to a whole number of drugs. The same thing could happen if you’re sick and instead of going to the doctor just take those pills you’ve got, and avoid going to the doctor alltogether. 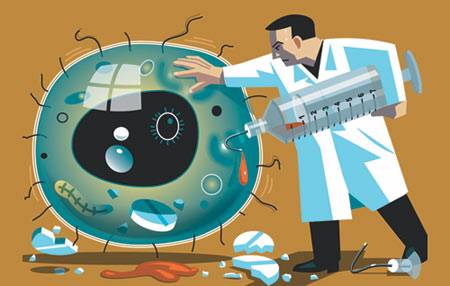 Basically, when administered in lethal levels, antibiotics trigger a fatal chain reaction within the bacteria that shreds the cell’s DNA. However, when the level is less than the lethal one, the results are not only the survival of the bacteria and the further resistance to this drug, but also to a whole series of other ones too.

“In effect, what doesn’t kill them makes them stronger,” said Collins, who is also a Howard Hughes Medical Institute investigator. “These findings drive home the need for tighter regulations on the use of antibiotics, especially in agriculture; for doctors to be more disciplined in their prescription of antibiotics; and for patients to be more disciplined in following their prescriptions.”

“We know free radicals damage DNA, and when that happens, DNA repair systems get called into play that are known to introduce mistakes, or mutations,” said Collins. “We arrived at the hypothesis that sub-lethal levels of antibiotics could bump up the mutation rate via the production of free radicals, and lead to the dramatic emergence of multi-drug resistance. The sub-lethal levels dramatically drove up the mutation levels, and produced a wide array of mutations,” Collins observed. “Because you’re not killing with the antibiotics, you’re allowing many different types of mutants to survive. We discovered that in this zoo of mutants, you can actually have a mutant that could be killed by the antibiotic that produced the mutation but, as a result of its mutation, be resistant to other antibiotics.”