Solar energy in the United States had its best quarter ever. Can it keep it up, though?

It's been a wonderful year for solar in the U.S.

The 3rd quarter of 2016 saw more photovoltaic (PV) systems installed than any other quarter so far. According to the latest market insight report released by GTM Research and the Solar Energy Industries Association (SEIA), this year is shaping up as yet another record-breaking one in installed solar capacity after a good 2015.

There’s great optimism for the current quarter as well. Despite no official figures have been released, the report’s authors claim Q4’16 is expected to greatly surpass Q3’2016. Over a million solar systems are operational in the country as of May 2016.

“Coming off our largest quarter ever and with an extremely impressive pipeline ahead, it’s safe to say the state of the solar industry here in America is strong,” said Tom Kimbis, SEIA’s interim president, in a statement to the press. “The solar market now enjoys an economically winning hand that pays off both financially and environmentally, and American taxpayers have noticed. With a 90 percent favorability rating and 209,000-plus jobs, the U.S. solar industry has proven that when you combine smart policies with smart 21st-century technology, consumers and businesses both benefit.” 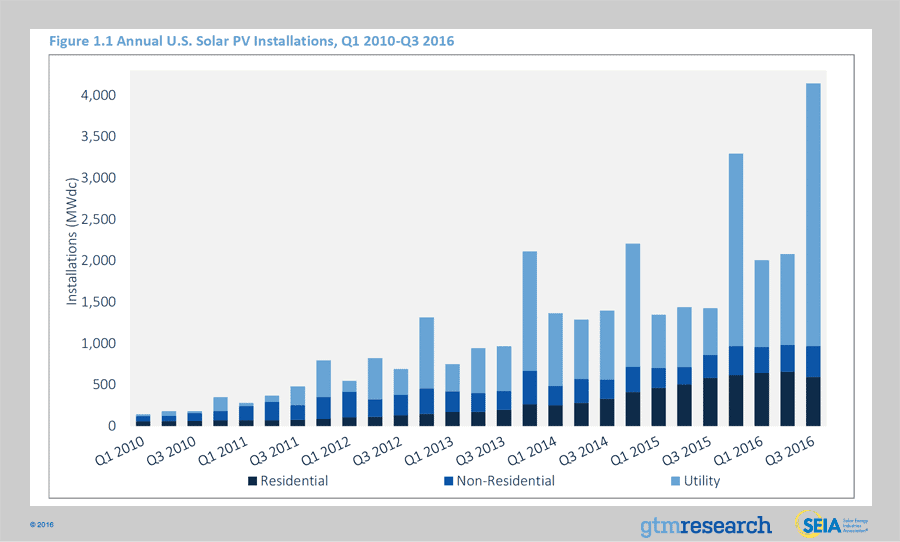 The unprecedented growth of the U.S. solar industry was primarily sustained by utility-scale installation, which represented 77% of all the solar power installed in the third quarter. Just so you can get a sense of what’s to come in Q4, 4.8 GW worth of utility-scale projects will come online by the end of this year. That’s more than all the utility PV installed in 2015.

The massive deployment of utility-scale solar can be pinned to anxiety and uncertainty over the expiration of tax credits. Congress, however, extended these until 2019. Maybe 2017 might not be so good as 2016 but the next two years will see a lot of growth for solar.

The bad news is that post-2019 things look murky. It doesn’t seem probable that tax credits that incentives solar use will be extended by the new administration. On the other hand, solar energy might become so cheap by then that it doesn’t really matter what the government has to say. Market forces will sustain the momentum. In places in the U.S., solar energy is cheaper than fossil fuels even without subsidies.

ADVERTISEMENT
Tags: solar energysolar panels
IN THESE TRYING TIMES
Accurate scientific information is more important than ever. We're here to help make sense of it all:
coronavirus and beyond.

What is keto: the fat-burning diet

Keto is the fad diet of the decade, but does it really work and is it safe?

What stress is, how it affects us, and how to handle it

What is Medicare and what does it cover?