Solar energy now cheaper than fossil fuels even without subsidies

You can only postpone the inevitable.

Speaking to CNBC’s Bob Pisani, energy analyst Ramez Naam gave a brief overview of where the solar energy market stands today. Essentially, Naam reiterated what ZME Science has been reporting closely over the last few years: solar energy is getting cheaper by the minute to the point that it’s now cheaper than fossil fuels even without subsidies in those sunny places like Nevada in the United States or Dubai in the United Arab Emirates.

The tech is moving fast to other places which traditionally aren’t shined by so much sun, simply because businesses and residents would be foolish not to adopt it.

All of these prices were made subsidies not included, unlike coal, gas or oil which amount to $452 billion each year across G20 states.

Last December, Congress extended the federal investment tax credit which gives a tax credit of 30 percent of the value of solar projects. Under the new scheme, the 30 percent solar tax credit will extend through 2019 and then decline gradually to 10 percent in 2022. After 2022 the credit will be eliminated for residential solar installations and will continue at 10 percent for commercial ones.

Meanwhile, fossil fuels will still be subsidized even though the tech is centuries old. Apparently, solar and wind deserve subsidies only for a couple of years until they’ve matured, which if fair in this context, but not in the larger one where fossil fuels still retain enormous subsidies. This is essentially a form of disloyal competition.

Despite this setback, solar energy contractors are already working hard to push the solar energy kilowatt-hour price tag down to the point where it’s least just as cheap as fossil fuels post-2020 — tax credits or not.

That’s a nationwide plan, in the United States, because solar energy is already cheaper without subsidies than subsidized fossil fuels in many sunny places. So far, 30 million Americans enjoy clean solar energy that’s cheaper than their fossil run utility electricity.

“The unsubsidized electricity cost from industrial-scale solar PV in the most favorable locations is now well below $40 per megawatt-hour and could very easily be below $20 per megawatt-hour by 2020. Compared to other new sources of supply, this would be the cheapest electricity on the planet,” said Harvard’s David Keith, a researcher who works the interface between climate science, energy technology, and public policy. 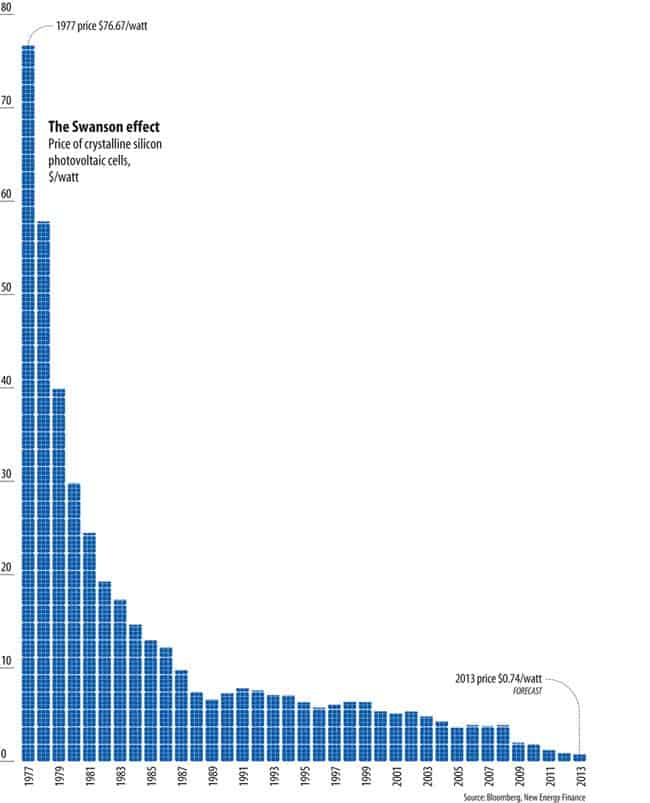 Right now, solar energy accounts for only 1% of all the electricity generated in the United States. This is a big problem, but one that can be turned into an advantage.

It means there’s a lot of headroom, and despite competition is fierce once a market leader positions itself, the growth will be explosive. The solar market should grow by 119 percent in 2016 compared to the previous year, and at least just as much capacity (16 gigawatts of solar) should come online year in year out until 2020.

“Think about the cost of energy—it fluctuates. But the cost of technology, like the cellphone in your pocket? Those costs only go down. So now we have a technology that produces energy. It just gets cheaper and cheaper and will disrupt everything in its path,” Naam told CNBC.