The one-millionth solar system was installed in the United States

In April, the United States hit an important milestone in the quest for full renewable energy transition after the one-millionth solar system was installed.

In April, the United States hit an important milestone in the quest for full renewable energy transition after the one-millionth solar system was installed.

One million solar system might sound like a lot, but they’re barely making a dent in the country’s energy generation mix. Right now, solar energy accounts for  27 gigawatts (GW) of electric generation capacity across all 50 states and one percent of total U.S. power supply.

It’s still fantastic news, though, once you factor in the rate of progress over the last couple of years and the projected growth. It took 40 years to install one million solar capacities, but the next one million will be added in only two years, and by 2020 the country expects to generate three percent of its power supply from solar.

“This is a time to mark when the solar industry started to accelerate at warp speed,” said Dan Whitten, vice president of communications at the Solar Energy Industries Association (SEIA).

To celebrate the occasion, SEIA has launched an awareness campaign called #millionsolarstrong. You’re all invited to spread the word and join one of the events hosted by SEIA and partners near you.

“We want to open this conversation and let people know that we are now a part of the energy mainstream,” said Whitten. “We’re central to any discussion about America’s energy future.”

“The first 1 million solar installations came from a lot of state markets benefiting from steep cost reductions as well as incentive programs, like renewable portfolio standards and rooftop solar programs,” said Cory Honeyman, associate director of solar for GTM Research. “When we look at what defines the next 1 million installs, it will be a much more geographically diverse landscape and a growing number of states seeing solar come on-line purely based on how cost-competitive it is.” 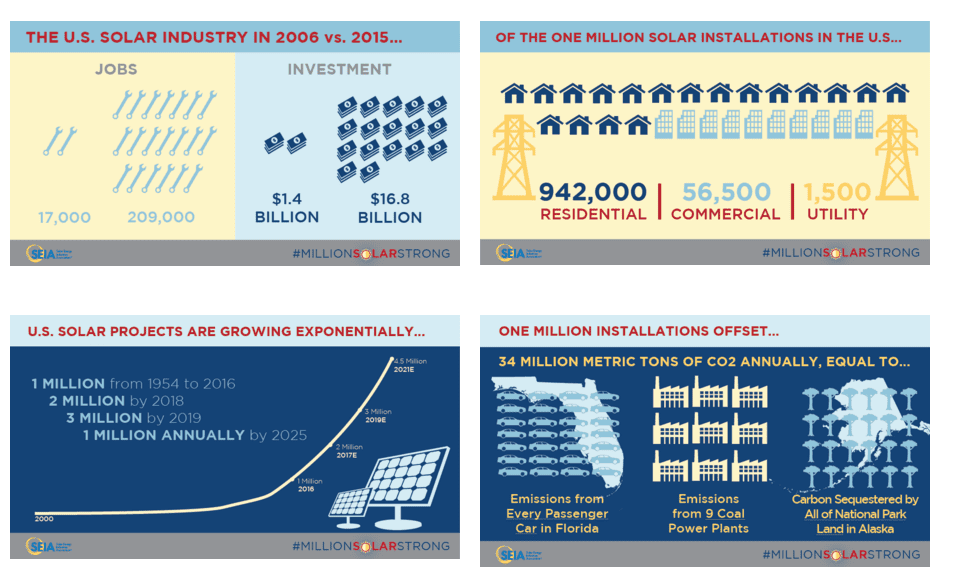 Here are some more interesting facts about solar:

Update: headline corrected from “one-millionth solar panel” to “[…] solar system”. There are far more than a million solar panels in the United States.