by Tibi Puiu
in Alien life, Astrophysics, Space
Reading Time: 2 mins read
A A
Share on FacebookShare on TwitterSubmit to Reddit 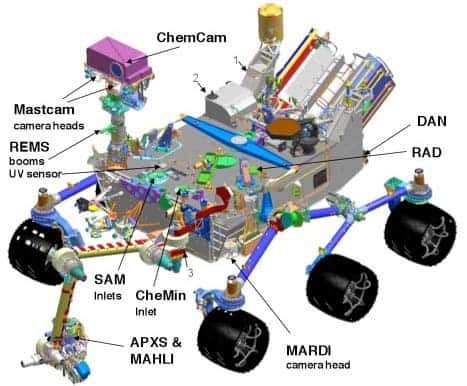 On November 26, after countless delays, budget overruns and buckets of sweat, humankind’s most capable machine of landing on and traveling through the red planet will finally touch base and launch towards its ambitious destination. The Curiosity rover‘s lift off is currently scheduled for 10:02 a.m. EST, this Saturday.

Also known as the Mars Science Laboratory (MSL), the Curiosity rover will travel on board an Atlas 5 rocket. The project, filled with over-budget spending, made NASA spill out $2.5 billion out of its pockets during the decade long operation. The rover is equipped with a plutonium battery and so should have ample power to keep rolling for more than a decade.

The rover is scheduled to land on Mars’ Gale Crater sometime around August, 2012, after which it will soon commence its mission of gathering and analyzing samples, in search for organic chemistry and evidence of whether Mars could ever have hosted life. Tomorrow’s event is certainly a milestone for NASA, and human space exploration history, and you can also be a part of it. Fortunately, the Curiosity rover launch will be covered by numerous media outlets, and NASA has been kind enough to offer a live stream for web users. Connect to this page at the launch hour and hit play on the stream below.