Take a three year trip on Mars alongside the Opportunity Rover

by Tibi Puiu
in Other, Remote sensing, Robotics
Reading Time: 4 mins read
A A
Share on FacebookShare on TwitterSubmit to Reddit 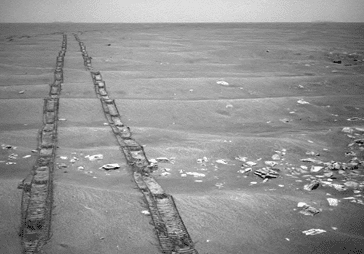 A virtual trek, that is. NASA has just released a stunning video comprised of 309 photos the agency’s Opportunity Rover took during it’s three year journey from the crater Victoria to the crater Endeavor. Although the spanned distance is only 13 miles, the whole trip lasted a whooping three years.

Granted, a relatively animated view of Mars’ surface is an incredible sight by all means, and we can only be grateful to NASA for this opportunity. The transmitted imagery sent back to Earth shows the red planet’s barren surface, with a mountain formation in the horizon as the Opportunity Rover gently strolls along, sometimes turning around to reveal its tracks impregnated in the red soil.

Incredible, isn’t it? You might have found the soundtrack to the video a bit annoying (no, it wasn’t static), however it’s worth noting that it was produced by low-frequency data from the rover’s accelerometer, sped up 1000 times to yield audible frequencies.

“The sound represents the vibrations of the rover while moving on the surface of Mars,” explained Paolo Bellutta, a rover planner at NASA’s Jet Propulsion Laboratory, Pasadena, Calif., who has plotted many of Opportunity’s drives and coordinated production of the video.

For its Mars surface exploration mission NASA launched two three-month long missions, the Spirit Rover and the Opportunity Rover. The mission, though, was such an unexpected stunning success that the rovers went on to operate and transmit invaluable data for many years after its warranty data. This summer, unfortunately, the Spirit Rover shut down after it got stuck in the soil – Opportunity is still up and running and might still be operational for many more years to come. NASA is slated to launch its next-gen rover Curiosity this summer, which will arrive at Mars’ Gale crater in August 2012.