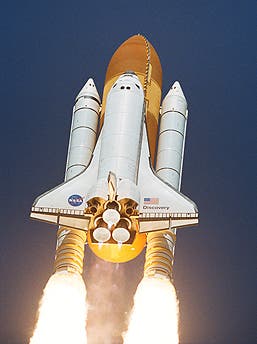 Tuesday will mark the 50th year since human space flight, since the day Yuri Gagarin left Russia and became the first man to go in outer space, as well as the 30th anniversary of the launch of the shuttle Discovery, the legendary but already retired space shuttle. This is the day when NASA will announce who will get to house the three other retiring space ships.

Moving, cleaning, and preparing the space ships is a thorough and costly operation, and it will rise up to $28 million apiece; the costs will be assured by whoever gets to keep them in exchange for… keeping them. The first criteria of selection is to be somehow related to NASA‘s space program, which is not unreasonable at all, giving the numerous appliants and the few shuttles. However, even so, there are only 3 shuttles and 21 elligibile locations.

So far, the decision process has been covered in mystery, and there’s no indication we will get a clue before tomorrow, when NASA will announce the retiring place of the shuttles. It is a difficult process, and it’s hard to keep the political out of it, but hopefully, wherever they go, they will be a standing testament to the efforts of so many brave men and women, and to the intelligence of humans, who can defeat so many things, including the gravitational pull.