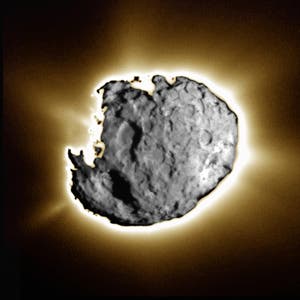 Two days ago, the whole world was teeming with excitement, after some NASA researchers reported finding traces of alien life in meteorites; now, even their employer distances itself from them, and the whole scientific world seems to frown upon this work. However, in what is a very unusual move, NASA has denied any involvement with the paper, and even the Journal of Astrobiology refused to published the paper.

However, lead author Richard Hoover, engineer at NASA’s Marshall Space Flight Center in Huntsville, Alabama did publish his research in the online Journal of Cosmology, a publication which supports the idea that life came from outer space. Of course Fox News, in their usual and disturbing way, made big (and biased) news from this report, which led to NASA condemning the study; and it didn’t take long until other scientists followed too.

“NASA cannot stand behind or support a scientific claim unless it has been peer-reviewed or thoroughly examined by other qualified experts…. NASA was unaware of the recent submission of the paper to the Journal of Cosmology or of the paper’s subsequent publication.”

Now, the Journal of Cosmology is not your average publication; the 2 year publication claims to be peer reviewed, but this time, they published the report BEFORE having other peers review it, which is highly unprofessional and unethical. The journal was reported to be closed on Monday, being “killed by thieves and crooks” at the journal Science and other subscription-based periodicals. I’m not really sure at all what the situation is, but in this particular case, they messed up – if you want to ensure the accuracy of a publication, you have to peer review it before publishing it.

Biologists from all over the world have dashed and bashed the paper, claiming that other structures similar to those of the bacteria can easily be found in nature, and contamination cannot be ruled out either.

“Move along folks. There’s nothing to see here,” wrote Rosie Redfield, a microbiologist at the University of British Columbia,

Mister Hoover was unavailable for comments.