There are currently an estimated 19,000 individual space debris swirling around Earth’s orbit at 17,000 miles/hour, posing great threat to current active satellites, telescopes, future launches in orbit, the International Space Station and even astronauts out on space walks. It’s very clear that something must be done, before the Earth gets one of its own Saturn-like rings, but made of junk.

Swiss engineers have recently initialized a project which might offer a valid solution to this dire issue. Namely, the Swiss Space Center at École Polytechnique Fédérale de Lausanne (EPFL) have announced the CleanSpace One, or the “janitor satellite” as it’s also been dubbed – a trash retrieving satellite.

Since 1958, when the first satellite, the Russian Sputnik, was launched into orbit, thousands of space junk debris have been amassed as rocket modules were jettisoned during launches or satellites bits broke off. These numbers are only set to increase dramatically, not just due to future launches, but rather as a result of collisions between space junk that render even more bits. In 2009 a $55 million American satellite collided with an inactive Russian Satellite, destroying it and creating 2,000 smaller pieces of debris in the process. A space debris the size of coin, considering the extreme velocity with which it orbits, is enough to blow to smithereens any satellite and potentially damage the ISS beyond recovery.

“Something has to be done about this problem. Collisions between satellite and debris are bound to happen,” said Volker Gass, director of the Swiss Space Center.  “There’s going to be an avalanche effect, and more satellites are going to be destroyed.”

NASA is currently tracking every piece of space debris, a process which costs the agency millions each year, but of critical importance if launches may be made safely. Actually, NASA had a plan of its own (might still be, haven’t heard anything about it for some time) for dealing with the space junk issue, namely a laser cannon designed to shoot off debris and place them out of orbit for a Earth entry, where they would be subsequentely destroyed by the atmosphere.

The Swiss project seems a bit more practical. It involves the development of a family of satellites specialized in cleaning up debris, retrieving the floating obstacles in a safe and controlled manner. The “janitor satellite” would adjust its trajectory to meet-up with its targeted debris, one of the many challenges engineers faced (remember, we’re talking about 17,000 mph velocities) grip it and then re-enter the Earth’s atmosphere. 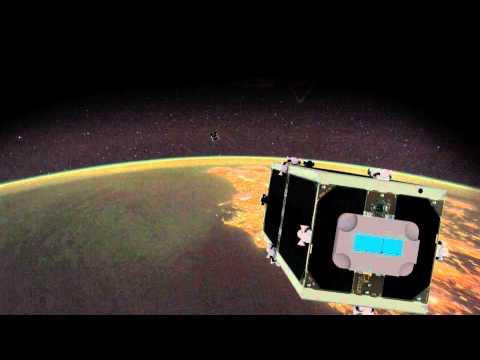 The first models are set for kamikaze missions, however the  CleanSpace One adventure will not be a one-shot deal.

“We want to offer and sell a whole family of ready-made systems, designed as sustainably as possible, that are able to de-orbit several different kinds of satellites,” explained Gass in a statement. “Space agencies are increasingly finding it necessary to take into consideration and prepare for the elimination of the stuff they’re sending into space. We want to be the pioneers in this area.”