by Tibi Puiu
in Remote sensing, Space, Space flight
Reading Time: 2 mins read
A A
Share on FacebookShare on TwitterSubmit to Reddit 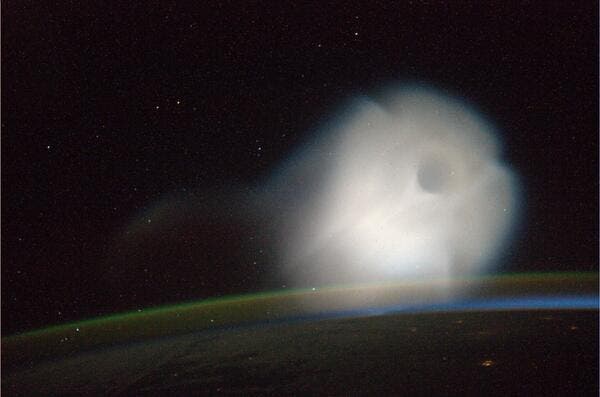 Right after World Space Week ended just last week –  an event that celebrates the anniversary of the signing of the Outer Space Treaty that prohibits the militarization of space – Russia made a test launch for one of its new types of intercontinental ballistic missiles; missiles capable of launching their nuclear warhead payload from outer space. The launch apparently caught astronauts from the International Space Station by surprise who were not aware of the launch.

Astronaut Luca Parmitano tweeted this after he caught the unexpected missile trailing through the horizon as its upper stage disintegrated, leaving behind an orbital cloud.

Now am I the only one who finds it odd that no one informed the ISS mission crew, of all people, that there would be a missile launch that night? Government shutdown may have had something to do with this, but there is a NASA crew which certainly is still on the clock – why haven’t they announced the launch? Then, there hadn’t been any word from Europe or Russia either, the latter being the launcher itself.

The missile in question is a Topol/SS-25, part of the new Topol class of intercontinental ballistic missiles – the first to be developed after the dissolution of the Soviet Union. These frightening weapons can be launched like any rocket from the ground or underwater via submarine, only unlike any typical rocket, ICBMs can travel for thousands of miles. The 52 ton (at launch) missile has an operational range of 11,000 kilometers (6,800 miles). Russian Forces blog issued this statement on Friday, post-launch.

“The Strategic Rocket Forces carried out a successful test launch of a Topol/SS-25 missile on October 10, 2013. The missile was launched at 17:39 MSK (13:39 UTC) from Kapustin Yar to the Sary Shagan test site in Kazakhstan. According to a representative of the Rocket Forces, the test was used to confirm characteristics of the Topol missile, to test the systems of the Sary Shagan test site, and “to test new combat payload for intercontinental ballistic missiles.”

According to the Information Telegraph Agency of Russia news agency, a Russian spokesman said the test was carried out to test key stability missile features. The missile launch was reported as being a success.