Scottish manufacturer Ballantines comes to the aid of space-dwellers the world round (and beyond) with a new, high-tech glass that promises to make getting hammered with style in space a reality.

by Alexandru Micu
in Design, News, Science, Space, Videos
A A

Another full and tiring day is over, and you just want to unwind with a nice glass of whiskey. You pour yourself a shot, and take up the glass, gleefully anticipating the aged flavor and warming flow of the liquor but then, disaster strikes. The drink floats up lazily into the cabin, in a most unglasslike sphere – you’re an astronaut, and you can’t get your buzz on, foiled by zero G.

If there’s one thing we at ZME Science support wholeheartedly it’s drinking…For science! We’ve already told you how Japanese distillery Suntory and Socttish Ardbeg Distillery sent samples of the amber nectar into orbit to study how the aging process can be improved when gravity is taken out of the mix.

Suntory’s packs of liquor were outfitted with straws, but it’s unlikely the astronauts manning the ISS would take a sip in such a crude manner.

But worry not, for Scottish manufacturer Ballantine comes to the aid of space-dwellers the world round (and beyond) with a new, high-tech glass that promises to make getting hammered with style in space a reality.

To make the glass space-friendly, Ballantine relied on James Parr from the Open Space Agency to engineer a system that would solve a two-fold problem: pouring the liquor inside, and getting it out only when drinking.

The solution Parr came up with is a futuristic glass that has a convex gold plate embedded in its base. This metal sheet provides enough surface tension to hold the liquid down. The drink then passes through a spiraling channel in the form of a helix, built around the glass’ side walls, reaching up to a golden mouthpiece. It was successfully tested in a microgravity environment at the Zarm Drop Tower in Bremen, Germany, Wired reports.

Most of the materials including the gold base and the “glass” itself are 3-D-printed. The “glass” itself is a medical-grade PLA plastic since actual glass is fragile and could break easily as it floats in microgravity.

The tiny hole you see in the bottom of the glass is a valve through which the drink can be poured into the glass. Gold plate was chosen over other metals since it’s chemically unreactive and won’t spoil the liquor’s taste. But what good is it to have the whiskey contained if the glass is just gonna float around the spaceship? Well, it won’t – a magnet is built-in beneath the base plate to hold the glass down on magnetic surfaces.

They also put together an awesome presentation video for the glass: 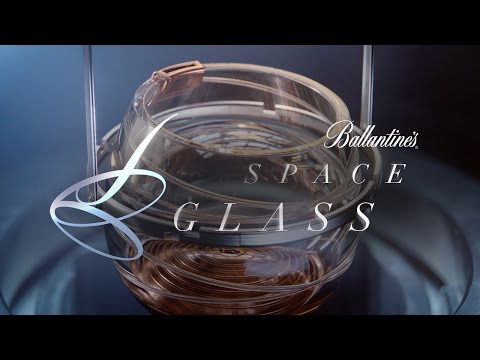 Ballantine published the details of the process in an article for Medium.