As we already told you, after the first launch attempt was stopped with just one second to go, SpaceX finally managed to send its Falcon 9 rocket to the ISS – and to the history books. But for NASA, this is not necessarily a good thing, because for the first time in history, instead of flying a ship, they retired to the back seat and just rented the flight.

Why did NASA go for this strategy?

Well, the old shuttles were old, expensive, and even unsafe, and so they decided to focus more on major missions, especially as they claim we will soon see competition and innovation which will drive down the cost of routine launches. Thus NASA can focus instead on developing future deep-space missions.

Also, the development of the Falcon 9 rocket was about 3 times cheaper than what NASA would have spent if they would have built the ship themselves – and even using a renting system, this saves them a lot of money. SpaceX rockets also require many fewer people to build, launch and operate than the shuttle did, and they build all the components on one site, which saves a lot of money as well.

How is the shuttle different from the previous ones? 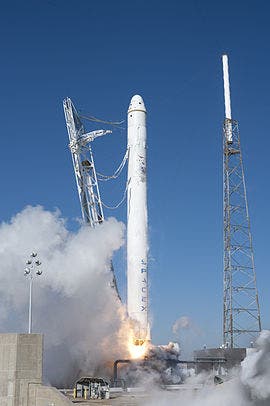 Falcon 9 and the Dragon capsule are much smaller and can also carry less cargo, but with the construction of the ISS complete – that is just fine. While the current capsule is unmanned, SpaceX plans to soon upgrade it to carry as many as seven people on to orbit. If Dragon does dock with the station as planned, it will signal that SpaceX is ready to move from vehicle development to regular operations – which will carry anywhere from 5 to 7 years.

Putting the awesome back into space flight

When Elon Musk, SpaceX founder and chief architect got his second bachelor degree, he started PayPal, and then made millions selling it. In a fascinating move, he returned to school to finish his PhD, them invested all the money into SpaceX and Tesla (you might have heard of the Tesla Roadster, am I right?). When he called his friend to tell them he was building a a spaceship and that he would be naming it Falcon after the Millenium Falcon from Star Wars, they asked him what he was smoking – and thus, the name was born – Dragon, as in puff.