SpaceX perfectly lands a rocket on a floating barge. The footage will take your breath away

Few things in life can claim to be truly breathtaking, and even fewer of those things are man-made. But this perfect rocket landing from SpaceX can definitely claim that:

by Mihai Andrei
in News, Space, Space flight, Videos
A A

Few things in life can claim to be truly breathtaking, and even fewer of those things are man-made. But this perfect rocket landing from SpaceX can definitely claim that: 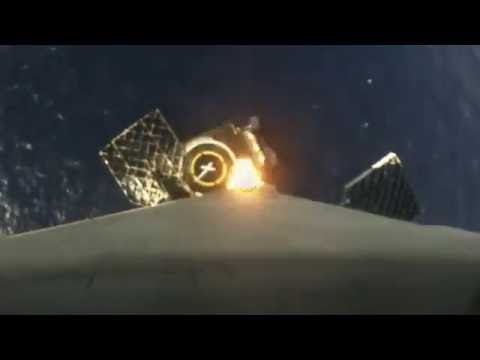 For the third time in a row, SpaceX demonstrated its ability to land a reusable spacecraft on a floating barge, in the middle of the ocean. This is the first time they’ve actually released footage of the landing filmed from onboard their Falcon 9 rocket — it almost looks like you’re riding the rocket yourself.

The footage shows the rocket rapidly rising to a high geostationary orbit some 35,000 km (22,000 miles) above the Earth and then landing in a very small barge. Recovering used rockets is a technology which could save many millions of dollars for space exploration agencies (and the company itself). In the long term, this will bring down the cost of space exploration and the installing of satellites, aside for being massively impressive and cool.

In 2015, just before Christmas, SpaceX made history when they successfully managed to launch a rocket, send it to outer space, and then land it back safely. Then, for the first time, the prospect of using reusable rockets became a reality. After a few failed attempts, SpaceX finally landed such a rocket on a floating barge and now, they’ve successfully done it three times in a row, showing that the first time was no accident.