After hurricane Irene, the wildfires ravaging through texas are also visible for astronauts on the International Space Station, as these new pictures sent by them reveal. 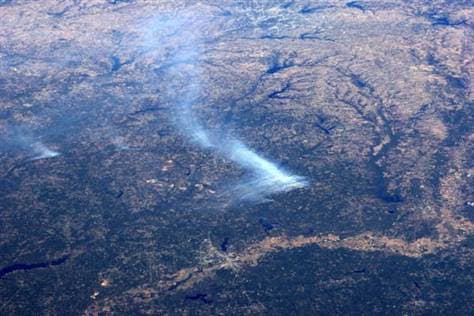 It was especially sad for NASA astronaut Mike Fossum, because Bastrop State Park, one of the damaged areas, is a favorite spot of his. He specifically asked to be updated with the situation of the fires which have raged over thousands of acres in Central Texas during the past week. The fires are thought to have been spurred by winds from Tropical Storm Lee, and then spread like… well, like wildfire.

“Did you guys confirm that the state park Bastrop is one of the directly affected areas with the fire in that region?” Fossum asked from space on Tuesday.

Yes Mike, unfortunately that’s true,” capcom Jay Marschke replied from Houston. “The news agencies are reporting up to two-thirds of the park has been burned and hundreds of homes in the area have been destroyed.”

Fossum, who is an avid outdoorer, was absolutely stunned to hear this, but did not forget to send out his best wishes.

“Oh, wow,” he said. “Wow, that’s rough news. Thanks. We’re really thinking about all those folks through there.”

Garan and Fossum are currently living on the International Space Station along with one Japanese astronaut and three Russian cosmonauts, but the situation on the ISS is still unstable, so it remains to be seen if it will be abandoned for a few months or not.