by Mihai Andrei
in Astronomy, News, Space
Reading Time: 3 mins read
A A
Share on FacebookShare on TwitterSubmit to Reddit

Growing vegetables in outer space – something which science fiction readers are very familiar with, but in the real world, this is a first – NASA’s veggie growing chambers have activated. 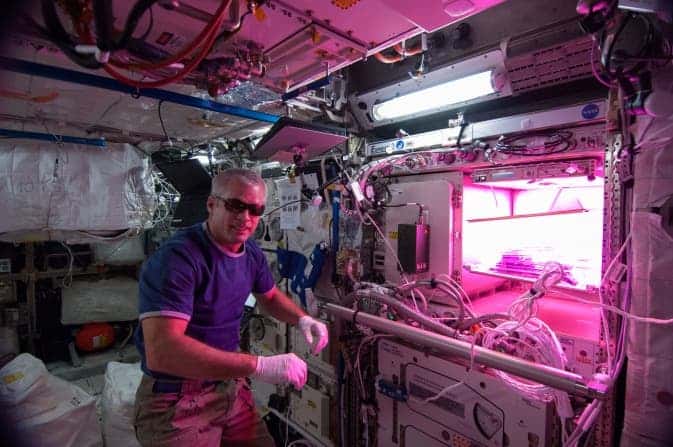 We were telling you a while ago about NASA’s plans to start growing vegetables onboard the ISS – and now, the system is online. The main question which is on everybody’s mind is “Will plants grow normally in microgravity?”. The plausible answer is mostly ‘Yes’. There will be of course differences in the growth patterns (plants will grow in all directions equally probably), but biologists do expect them to grow.

The first fresh food production system, along with the Veg-01 experiment, were delivered to the space station on the SpaceX-3 mission from Cape Canaveral in April and will rely on red, blue and green LED lights to stimulate growth. A root mat and six plant “pillows,” each containing ‘Outredgeous’ red romaine lettuce seeds, with each plant pillow containing controlled release fertilizer and a type of calcined clay used on baseball fields which stimulates growth. 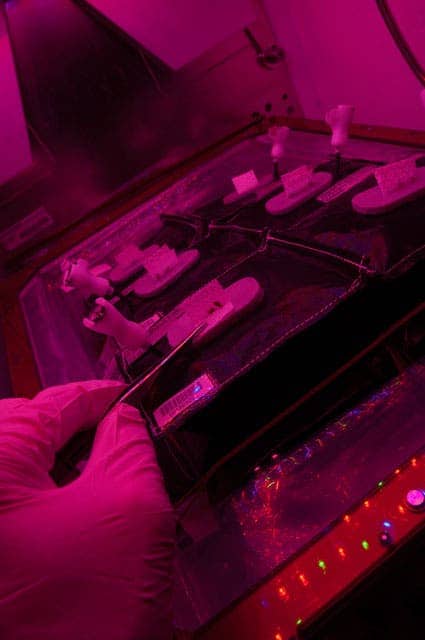 “The farther and longer humans go away from Earth, the greater the need to be able to grow plants for food, atmosphere recycling and psychological benefits,” Dr. Gioia Massa, leader of the Veggie project said. “I think that plant systems will become important components of any long-duration exploration scenario.”

In the short run, it will improve the life quality of astronauts onboard the International Space and lower the space of transporting food – allowing them to grow and eat fresh vegetables.

“My hopes are that Veggie will eventually enable the crew to regularly grow and consume fresh vegetables,” Massa said.

This first batch of vegetables will grow for 28 days – photographs will be taken weekly, and we’ll definitely publish them when they are released. Also, microbial samples will be taken to check and study any microorganisms growing on the vegetables which may affect the crop. Veggie will remain on the station permanently and could become a research platform for other top-growing plant experiments; if these first experiments work out fine, they could pave the way for a new generation of studies.

“Veggie could be used as a modular plant chamber for a variety of plants that grow up rather than in the ground,” said Gerard Newsham, the Veggie payload support specialist with Jacobs Technology on the Test and Operations Support Contract. “This is just the beginning.”

In time, as the scientific bases and limits are established for the project, astronauts will be given more freedom, and the entire project will become more like a garden.

“I hope that the astronauts on the space station eventually will use the equipment to ‘experiment’ with their own seeds or projects,” said Nicole Dufour, who coordinated and led the testing of the flight hardware at Kennedy and wrote the crew procedures for the astronauts to use on space station. “Veggie is designed for crew interaction and to enjoy the plants as they are growing.”