A large asteroid will pass Earth, closer than Moon

According to NASA, a large asteroid called 2005 YU55 is expected to pass at some 201,700 miles of Earth on Tuesday – closer than the Moon, and definitely closer than the Elenin comet. 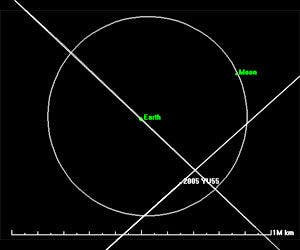 Now, before people start going all 2012 armageddon on me, let it be said that asteroids often pass at this distance from our planet; however, most of them are tiny – what makes this one a little more special is its size, but again, there’s absolutely nothing to panic about here.

2005 YU is at least 1,300 feet wide, which is bigger than your average aircraft – actually, it’s even bigger than an aircraft carrier; the last time an asteroid of this size passed this close was in 1976, and the next time  is set for 2028.

Don Yeomans, manager of NASA‘s Near-Earth Object Program Office at Jet Propulsion Laboratory, in Pasadena, California believes this flyby gives us a valuable chance to learn more about c class meteorites (made from carbon, that is), which in turn, will provide valuable information about the forming of our solar system.

This type of asteroids have a different, perhaps even more significant value: it is believed by some, that one of this kind smashed into a primeval Earth, carrying organic, carbon-based materials, thus paving the way for life to appear.

“Without objects of this type, we probably wouldn’t be here,” Yeomans said.

Such an event now, however, would be catastrophic. The most notable and perhaps deadliest such event took place some 65 million years ago, leading to the extinction of the dinosaurs (that fact is still controversial, but most scientists believe this theory). Even if this is not the case now, it is a good reminder of what can happen, and a good warning that in the unlikely yet possible event of an asteroid coming towards Earth, the different nations have to work together to find the best course of action.

Meanwhile, asteroid 2005 YU55 continues its path; to describe it, it is a roughly spherical, darker than charcoal and it is spinning slowly. It will not be visible to the naked eye, so astronomy afficionados will have to use a telescope with a light-gathering mirror six inches or more in diameter.