‘Mount Sharp’, the landing site for Curiosity, is just an informal name

I have to admit this one caught me off-guard: Mount Sharp, the destination for the new Mars Rover is at the center of a minor naming confusion: its official name isn’t actually Mount Sharp. 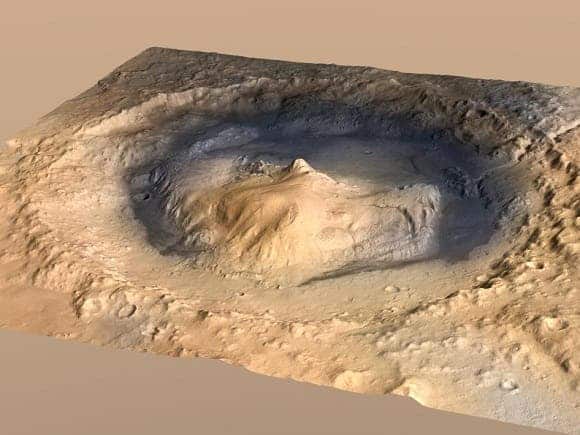 As of today only three days remain until the much expected land, and I was just reading some details about Curiosity and the land itself, when I came across this fact.

“Mount Sharp is only an informal name,” says Guy Webster of NASA’s Jet Propulsion Laboratory, picked in March to honor the late geologist Robert Sharp (1911-2004) by the rover science team. “Bob Sharp was one of the best field geologists this country has ever had,” said Michael Malin of Malin Space Systems, who heads a rover instrument team, in a statement then.

But in May, the International Astronomical Union (IAU) selected “Aeolis Mons” – as part of the long standing tradition to give Latin names to Martian mountains. However, not only the media prefers the “traditional” name – researchers seem to love it too. Even though the IAU named a nearby crater “Sharp”, Webster says, “but the rover isn’t going to visit that one.” No disrespect is intended to the IAU, he adds, “but we’ll probably keep on calling it Mount Sharp.”

So, just so we’re clear, Aeolis Mons and Mount Sharp are the same thing – whenever we’ll make a reference, we’ll try to use both names, but if for any reason we don’t, remember it’s the same thing, with two different names.

As for the Curiosity mission, there’s nothing special going on at the moment. Everything seems to be going according to plan, but researchers are eagerly awaiting for the delicate landing moment. Of course, we’ll keep you posted with everything that happens in these few days, as well as during the land.