‘Yuri Gagarin’ blasts off to the ISS

It’s a pretty busy period for the people over at the International Space Station (ISS). Kazakhstan’s Baikonur Cosmodrome last night paid tribute to Yuri Gagarin as the Soyuz TMA-21 spacecraft named after the first man to walk into space blasted off towards the ISS. 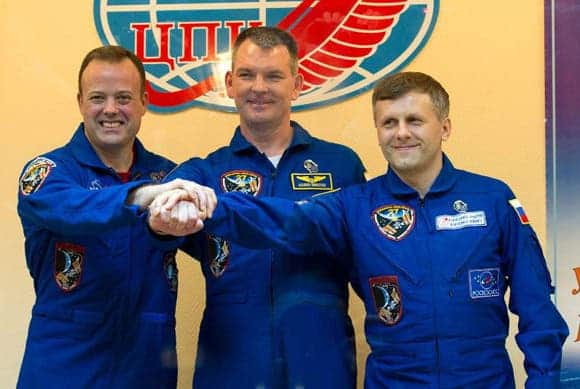 A week from now, on April 12, we will be celebrating 50 years from the groundbreaking first flight into outer space, done by Yuri Gagarin, and astronauts Ronald Garan, and cosmonauts Alexander Samokutyayev and Andrei Borisenko departed from the same pad as their predecessor.

The Soyuz, a legedary Russian spaceship is due to dock the ISS tomorrow, and there it will hook up with Expedition 27 crew members commander Dmitry Kondratyev, and flight engineers Cady Coleman and Paolo Nespoli who have been orbiting the space station since December last year and will return to Earth in May. They will be replaced by NASA astronaut Mike Fossum, cosmonaut Sergei Volkov and Japan Aerospace Exploration Agency astronaut Satoshi Furukawa. NASA will be streaming LIVE videos of tomorrow’s docking here, and if you ask me, it wil be quite a show, so don’t miss it.

EDIT: the live broadcast is already running, you can see the guys gearing up and preparing for the launch.