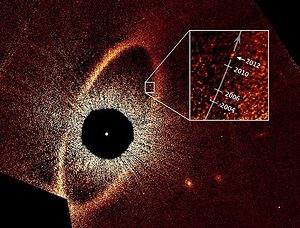 Back in 2008, Hubble released a stunning image of a very bright star called Fomalhaut which spanned a huge disk of matter around it. The whole picture bared an uncanny resemblance to the eye of Sauron from the Lord of the Rings movies. Also at the time, scientists caught the glimpse of a tiny speck of light deep in the debris disk which they believed was in fact an exoplanet.

Since then, however, followup observations had failed to find the distant world again. In 2010 the bleep of light appeared once again on the astronomers’ radar, but this time it was too far away in the right side of the start to orbit it, which lead many researchers to discount the find.

Newly-released Hubble images show that the debris belt is wider than previously known, spanning a section of space from 14 to nearly 20 billion miles from the star. Apparently, the planet Fomalhaut b follows a  highly eccentric path around the star coming in as close  as 4.6 billion miles, and as far away as 27 billion miles. Moreover, the planet’s orbit isn’t in the same plan as the huge disk, meaning it skews and passes above and below the disk.

“We are shocked. This is not what we expected,” says Paul Kalas of the University of California at Berkeley and the SETI Institute.

“Hot Jupiters get tossed through scattering events, where one planet goes in and one gets thrown out,” says Mark Clampin of NASA’s Goddard Space Flight Center. “This could be the planet that gets thrown out.”

In the video below, astronomers show one possible orbit for Fomalhaut b derived from the analysis of Hubble Space Telescope data between 2004 and 2012. The findings were presented at the  American Astronomical Society 2013 conference.