The “Ring Nebula” is a very popular target for amateur astronomers around the world since its bright glow and highly characteristic shape make it easily identifiable, even to those who have yet to learn even the most basic tricks of the trade. This fantastic cosmic cloud tells the story of a dying star and for years astronomers have been peering it with powerful telescopes, such as Hubble, looking to learn more about it.

New observations from Hubble, courtesy of the telescope’s powerful Wide Field Camera 3 instrument, now show that nebula isn’t shaped like a ring at all, but rather like a doughnut filled with  jelly in its inner rim. The object is tilted toward Earth so that astronomers see the ring face-on, but when imaged in 3-D the nebula’s shape is more sophisticated.

“The nebula is not like a bagel, but rather, it’s like a jelly doughnut, because it’s filled with material in the middle,” study leader C. Robert O’Dell, an astronomer with Vanderbilt University in Nashville, Tenn., said in a statement today.

The Ring nebula is a fantastic example of what happens to a star when it dies and we’ve been lucky enough to be close enough to see this. Located 2,000 light-years away in the Lyra constellation, the nebula formed some 4,000 years ago when a star, several times the mass of the sun, died. After the star burned all its nuclear fuel, it started to expand until it grew into a massive red giant. During this point the star began shedding its outer layers of gas as it collapsed in on itself to become a white dwarf; layers which were then expelled across trillions of miles by the the solar wind generated by the dying star. By studying the nebula, researchers hope to learn more about how Earth’s sun, which is a middle-age star, will die in 6 billion years.

“When the sun becomes a white dwarf, it will heat more slowly after it ejects its outer gaseous layers,” O’Dell said. “The material will be farther away once it becomes hot enough to illuminate the gas. This larger distance means the sun’s nebula will be fainter because it is more extended.”

Check out the video below for a fly-around and zoom on the Ring nebula for a better perspective. 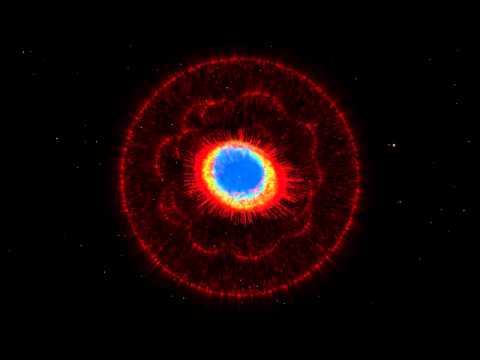