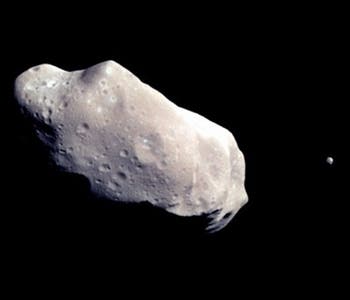 In 2004, NASA researchers identified the Apophis asteroid and after some quick calculations they states there is a chance the asteroid will hit our homey planet in 2029. A few observations and some other calculations later, they explained that that chance is extremely small for 2029, as well as other years to come. However, reports from Russia claim that the chance of Apophis hitting Earth is quite significant, and in this case, the asteroid, despite not being larger than two football fields, would do a whole lot of damage.

Still, NASA explains there is no need to panic.

“Technically, they’re correct, there is a chance in 2036 [that Apophis will hit Earth],” said Donald Yeomans, head of NASA’s Near-Earth Object Program Office. However, that chance is just 1-in-250,000, Yeomans said.

I’m not really sure, but I think those odds are way better than the odds of a car accident by 2036, so there is no major need to get agitated here. Russian researchers based their research on the fact that in 2029, Apophis will pass through what is called a gravitational keyhole, a precise region in space, only slightly larger than the asteroid itself, in which the effect of Earth’s gravity is such that it could tweak Apophis’ path.

“The situation is that in 2029, April 13, [Apophis] flies very close to the Earth, within five Earth radii, so that will be quite an event, but we’ve already ruled out the possibility of it hitting at that time,” Yeomans explains “On the other hand, if it goes through what we call a keyhole during that close Earth approach … then it will indeed be perturbed just right so that it will come back and smack Earth on April 13, 2036. The chances of the asteroid going through the keyhole, which is tiny compared to the asteroid, are “minuscule,” he added.

However, it will pass quite close to Earth in 2012, which will allow researchers to study it in far more detail, and we will still have time to devise a successful plan, even with today’s technology. All in all, no reason whatsoever to panic over this one.