How to deflect an asteroid with today’s technology 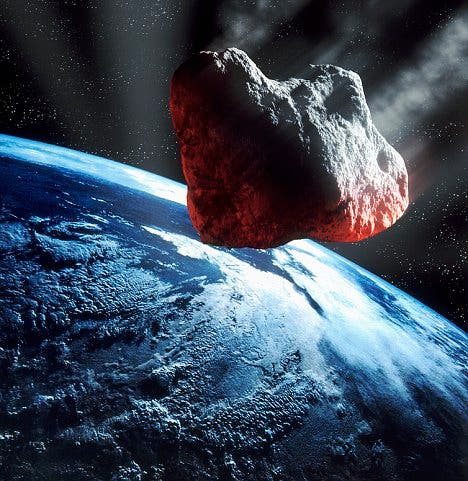 An asteroid threat to Earth seems like something we are going to have to face, sooner or later – and people are starting to aknowledge this fact; take Apollo 9 astronaut Rusty Schweickart for example. He is among a group of people that are championing the need to be prepared in case of such an event. According to him, we are on the right path:

“Our report and recommendations are a necessary, but not sufficient element of a sequence of actions which hopefully will lead to humanity being able to prevent future asteroid impacts with Earth,” Schweickart explained. “Assuming positive action by OSTP (Office of Science and Technology Policy) and the Congress, we’ll be well on our way to preventing future impact disasters.”

In a phone interview he gave Universe Today, he expains there are two possible approaches to such a deflection:
– either send a mission to the asteroid in an attempt to move it, or
– somehow change its orbit, so that it would become harmless.

These two strategies would have to be used together: a kinetic impact would “push” and somewhat deflect the asteroid, while a gravity tractor would “tug slowly” on the asteroid. These two methods are the best thing we’ve got at the moment.

“In a way, the kinetic impact was demonstrated by the Deep Impact mission back in 2005,” said Schweickart. “But that was a very big target and a small impactor that had relatively no effect on the comet. So, we haven’t really demonstrated the capability to have the guidance necessary to deflect a moderately sized asteroid.”

“You want to know what happens when you do a kinetic impact, so you want an ‘observer’ spacecraft up there as well,” Schweickart explained. “You don’t do a kinetic impact without an observation, because the impactor destroys itself in the process and without the observer you wouldn’t know what happened except by tracking the object over time, which is not the best way to find out whether you got the job done.”

So you would need to know with at least 10-15 years in advance – 50 would be great, in order to send a spacecraft to observe what’s going on.

“This, in fact, would also be a gravity tractor,” Schweickart said. “It doesn’t have to be real big, but bigger gets the job done a little faster. The feature you are interested in the outset is not the gravity tractor but the transponder that flies in formation with the asteroid and you track the NEO, and back on Earth we can know exactly where it is.”

Even the most precise and lucky estimation of the asteroid‘s orbit wouldn’t be as good as an estimation made at by a spacecraft located close to it. It will also estimate what kind of a kinetic impulse is required, if required at all.

“You may launch at the latest possible time, but at that time the probability of impact may be 1 in 5 or 1 or 2,” Schweickart said. “So the first thing you are going to do with the observer spacecraft is make a precise orbit determination and now you’re going to know if it really will impact Earth and even perhaps where it will impact.”

After the orbit is calculated, the required action has to be calculated too.

“So now, if needed you launch a kinetic impactor and now you know what job has to be done,” Schweickart said. “As the impactor is getting ready to impact the asteroid, the observer spacecraft pulls back and images what is going on so you can confirm the impact was solid, –not a glancing blow — and then after impact is done, the observer spacecraft goes back in and makes another precision orbit determination so that you can confirm that you changed its velocity so that it no longer will hit the Earth.”

The thing is, calculating the impact would be even harder, because the asteroid might go through what is called a “keyhole” – meaning that it will first avoid Earth, but then our planet’s gravity would pull it back again. That is the case with the Apophis asteroid, who will miss Earth in 2029, but might ome back to “visit” us in 2036.

“So if it does go through that keyhole,” said Schweickart, “now you can use the gravity tractor capability of the spacecraft to make a small adjustment so that it goes between keyholes on that close approach. And now you have a complete verified deflection campaign.”