New eco-friendly AC uses only water to cool down air, saves on the energy bill to boot

And it will quench your thirst!

by Alexandru Micu
in News, Science, Tech
A A

A new type of air conditioning is waiting to make its cool debut on the market. Suitable for both indoor and outdoor use, the system is much more energy efficient than traditional units, uses plain water instead of chemicals refrigerants, and produces drinking water to boot.

With the winter holidays coming to a close, it’s time to plan for the future. The hot, sweaty, sticky near-future of summer. There is solid ground to assume that this year will be a scorching one, which should still feel like small fry compared to those in the future.

All this heat will not be doing anyone any favors. According to researchers from the Natural Resources Defense Council, future summers won’t be only about ice-cream and beach holidays — they will be very deadly seasons, claiming tens of thousands of lives all across the US. The EU is on the hook too, and there’s no reason to believe people in other areas of the world will fare much cooler than, essentially, the world’s technological and economic powerhouses.

Too hot for comfort

It’s not an overstatement, then, to say that proper temperature control, in the form of air conditioning, will become a matter of life or death in the future. However, our current approach to the issue leaves us in a spot of hot water.

For one, air conditioning isn’t so much about ‘destroying’ heat as it is about taking it somewhere else — specifically, out of the room. Comfy on the inside, but the reverse of the coin is that the ‘outside’, especially if you live in a big city, gets much warmer very fast. Le Chatelier’s principle on equilibrium tells us that this will make it progressively more difficult for air conditioning units to actually push all that heat outside: it’s more laborious to create a big imbalance (pumping heat from a cold room to a hot outside) than a small one (say, between two bodies at closer temperatures). It’s like pushing water uphill. Which segues us into issue Mk.2:

The harder our ACs have to work, the more energy they need. Ironically, this makes everything hotter, as that energy degrades into heat. It’ll also put a large dent in many a family’s finances, and many people will have to contend with an unenviable choice: go into overdraft, or gamble that nobody’s going to get heatstroke. Zooming back even further, it will put a huge strain on often aging and already-overtaxed power grids — and we definitely don’t want these to pop when everybody’s hugging the AC for dear life.

Lastly, our current systems employ chemical refrigerants such as chlorofluorocarbons and hydrochlorofluorocarbons for cooling, which are quite nasty for the environment. More directly important to you, however, is that these compounds are quite expensive to manufacture and very deadly if leaks occur indoors.

So we need a better alternative. Luckily for us, that’s exactly what one team of researchers from the National University of Singapore (NUS) has been working on, with support from the Building and Construction Authority and National Research Foundation Singapore. The device they came up with could potentially address the limitations of the century-old AC principle in use today.

The water-based AC system can cool air down to 18° Celsius (64.4° F) without using the energy-intensive compressors or the chemical refrigerants the most common ACs today use. Suitable both for indoor and outdoor use, the device is fully portable and can be customized to work in all weather conditions, says the team led by Associate Professor Ernest Chua from the university’s Faculty of Engineering.

Because it relies on water in lieu of chemical refrigerants, the device is also cheaper to manufacture than traditional AC systems, is more sustainable, more eco-friendly, and potential leaks will be a nuisance at their worst. Running costs should also be much lower, as the team reports their cooler uses roughly 40% less electricity than traditional systems — good for your bill and the planet, too.

A final feature you’ll enjoy on a scorching noon is that the system also generates potable water as it cools your room.

“For buildings located in the tropics, more than 40 per cent of the building’s energy consumption is attributed to air-conditioning,” Chua says. “We expect this rate to increase dramatically, adding an extra punch to global warming.”

“Our novel membrane and water-based cooling technology is very eco-friendly — it can provide cool and dry air without using a compressor and chemical refrigerants. This is a new starting point for the next generation of air-conditioners, and our technology has immense potential to disrupt how air-conditioning has traditionally been provided.”

Instead of dehumidifying and cooling the air at the same time, as conventional designs do, the team from NUS decided to handle them separately. Finer control over each process allowed the team to increase their energy efficiency.

The first step in the process is to pass air through a paper-like membrane which removes moisture. Then, the dry air is passed through a dew-point cooking system. In broad lines, this is a system that uses part of the dry air produced in the first step to force evaporation on metallic plates inside the AC. Since water needs energy to turn into a gas (and heat is energy), this process cools the plates which, in turn, cool the air flowing through them. Out the end comes a stream of cooled, drier air than compared to the environment, and about 12 to 15 liters (12.68 to 15.85 quarts) of potable water per day. 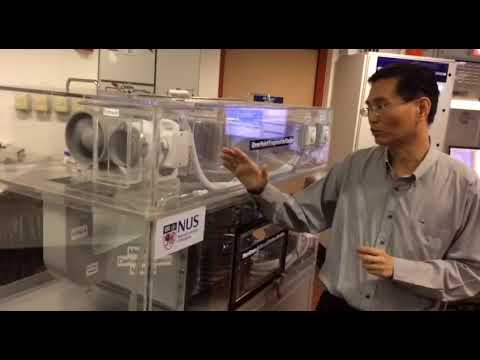 According to the team, the device can easily be adapted to work in all types of weather and climate, used for individual homes or scaled up to service clusters of buildings. The team says it’s particularly well-suited for confined areas that need reliable humidity control, such as bomb shelters, wine cellars, or hospitals. “Armoured personnel carriers, and operation decks of navy ships as well as aircrafts,” are also good candidates, Chua adds.

The team is currently refining its design to further improve user-friendliness. They plan to incorporate features including pre-programmed thermal settings, based on human occupancy, and real-time tracking of its energy efficiency. The team hopes to work with industry partners to commercialize the technology.