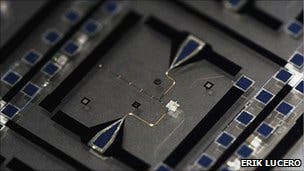 The microprocessors used today are absolutely amazing on their own; it seemed, and for good reason, that there was little we could do to improve them. If anything was to top microprocessors, it would have to be something from a totally different league, which is just down right hard. But then, the idea of quantum computers came along, and everybody started rubbing their hands.

Rather than using the 1 and 0 (binary) computing traditional computers use, quantum computers would use superpositions, states of matter than can be both 1 and 0 at once. In a way, the “trick” it uses is to perform calculations on all superposition states at once; that way, if you have one quantum bit (or a qubit), there isn’t much of a difference, but as you increase the number of qubits, the performance increases greatly.

The figure researchers generally approve as necessary for a competitive quantum processor is 100, so every improvement is significant.

“It’s pretty exciting we’re now at a point that we can start talking about what the architecture is we’re going to use if we make a quantum processor,” Erik Lucero of the University of California, Santa Barbara told the conference.

The thing is as you increase the number of qubits, you need to perform all sorts of tweaks and improvements, because the delicate quantum states that are created have to be manipulated, moved and stored without being destroyed.

“It’s a problem I’ve been thinking about for three or four years now, how to turn off the interactions,” UCSB’s John Martinis, who led the research. Now we’ve solved it, and that’s great – but there’s many other things we have to do.”

The solution came in what the team called the RezQu architecture, basically a different blueprint for creating a quantum computer. This architecture has a major advantage compared with others: it is scalable, so you can already start thinking about creating larger qubit computers already, and with relatively low technologies.

“There are competing architectures, like ion traps – trapping ions with lasers, but the complexity there is that you have to have a huge room full of PhDs just to run your lasers,” Mr Lucero said.

There are still many, many details to figure out, but the direction the research is going is good, and so is the speed.

“We’re right at the bleeding edge of actually having a quantum processor,” he said. “It’s been years that a whole community has blossomed just looking at the idea of, once we have a quantum computer, what are we going to do with it?”

If you ask me, it would be a welcome and big upgrade for top notch technology, as well as average computer users; there’s still a long way to go, but we’re getting there, and just thing about how many benefits quantum computers could bring, in a whole number of scientific fields (since many of them rely on computers to develop), and in day to day life as well.