by Mihai Andrei
in Research, Technology

During the past months we’ve been reporting several breakthroughs in the field of quantum computing, and now IBM seems ready to truly pave the way for quantum computers. Researchers announced they are now able to develop a superconducting qubit made from microfabricated silicon that maintains coherence long enough for practical computation. Whoa! That probably sounds like a lot to swallow, so let’s break it down.

Information is measured in ‘bits’, and a bit may have two positions (described typically as 0 or 1). Quantum computers however don’t use these bits, and instead they use quantum bits, or ‘qubits’. But while a bit must be a 0 or a 1, a qubit can be both 0, 1, or a superposition of both. This difference might seem small and subtle, but in fact, it is absolutely humongous: a mere hundred qubits can store more classical ‘bit’ information than there are atoms in the Universe.

Needless to say a computer running on qubits would be game changing, in pretty much the same way microprocessors were in their days. But what makes quantum computing extremely difficult is a problem called ‘decoherence‘. In the quantum world, things don’t happen as they do in the ‘real world’; when a qubit will move from the 0 state to the 1 state or to a superposition, it will decohere to state 0 due to interference from other parts of the computer. Generally speaking, decoherence is the loss order of the phase angles between the components. So in order for quantum computers to be practical and scalable, the system would have to remain coherent for a long enough time to allow error-correction techniques to function properly.

IBM announced they took two different approaches, both of which played a significant part in the breakthrough they revealed. The first one was to build a 3-D qubit made from superconducting, microfabricated silicon. The main advantage here is that the equipment and know-how necessary to create this technology already exists, nothing new has to be invented, thanks to developments made by Yale researchers (for which Steffen expressed a deep admiration). Using this approach, they managed to maintain coherence for 95 microseconds – “But you could round that to 100 for the piece if you want,” Steffen joked.

The second idea involved a traditional 2-D qubit, which IBM’s scientists used to build a “Controlled NOT gate” or CNOT gate, which is a building block of quantum computing. A CNOT gate connects two qubits in such a way that the second qubit will change state if the first qubit changes its state to 1. The CNOT gate was able to produce a coherence of 10 microseconds, which is long enough to show a 95% accuracy rate – a notable improvement from the 81% accuracy rate, the highest achieved until now. Of course, the technology is still years away from being actually on the shelves, but the developments are very impressive.

From quantum to reality 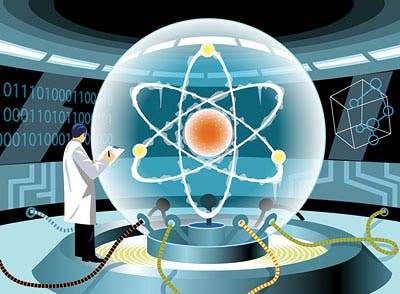 “There’s a growing sense that a quantum computer can’t be a laptop or desktop,” said Steffen. “Quantum computers may well just being housed in a large building somewhere. It’s not going to be something that’s very portable. In terms of application, I don’t think that’s a huge detriment because they’ll be able to solve problems so much faster than traditional computers.”

The next steps are simple, in principle, but extremely hard to do in practice. The accuracy rate has to be at at least 99.99%, up to the point where it achieves what is called a ‘logical qubit’ – one that, for practical purposes, doesn’t suffer decoherence. From that point, the only thing left to do is develop the quantum computer architecture, and this will prove troublesome too – but the reward is definitely worth it.

“We are very excited about how the quantum computing field has progressed over the past ten years,” he told me. “Our team has grown significantly over past 3 years, and I look forward to seeing that team continue to grow and take quantum computing to the next level.”