It may still be a while until we get our Harry Potter-like invisibility cloak, but researchers have managed, for the first time, to render a cylinder invisible to microwaves.

Invisibility is a notion that fascinated humans for centuries or even millennia; it’s just one of those things which never gets old, regardless of the period. We now know that, since we see objects because light bounces of their surface, if we want to make something invisible, you have to prevent it from reflecting light – simple in theory, extremely hard to practice. However, in 2006, invisibility became more of a practical matter, with the suggestion that artificially structured metamaterials could enable a new electromagnetic design paradigm – something which is now called transformation optics.

Since this term was coined, transformation optics has developed significantly – so greatly that it forced researchers to make simplifying approximations to achieve even a subset of the desired functionality. The problems with most devices spawned here – despite many ‘invisibility cloaks’ being tested successfully, they all reflected some of the incident light, which made the illusion incomplete.

This new research, published in Nature Materials showed how to pull that trick off flawlessly. Nathan Landy & David R. Smith teamed up in an effort to take things to the first level. Despite the perfection of their method, this only works from one direction, and with microwaves. But this is no spherical cow approach – it holds great promise for the future. 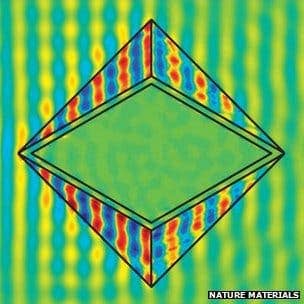 The material structures which can create such remarkable features are all but impossible to create, and again, some approximations were made. So when you would use your invisibility cloak, while you would see the image behind your object, you would see it distorted, mostly darkened – not very useful to make something invisible, but noticeable.

Now, Prof Smith and his Duke colleague have used a different approach. They have reworked the edges of the cloak, ensuring the light passes with around the cloak with completely no reflections. The trick was to used a diamond shaped cloak with properties carefully matched at the diamond’s corners.

“This to our knowledge is the first cloak that really addresses getting the transformation exactly right to get you that perfect invisibility,” Prof Smith told BBC News.

However, it was a “win some lose some” approach. While the illusion is perfect, it only works from one direction.

“It’s like the card people in Alice in Wonderland,” Prof Smith explained. “If they turn on their sides you can’t see them but they’re obviously visible if you look from the other direction.”

This wouldn’t even be the biggest problem. It would be extremely hard to make the device function at optical wavelengths, which are much larger than those of the microwaves. However, this could be extremely useful in many applications, principally telecommunications and radar, for which it could greatly improve the performance.

“The cloak we demonstrated in 2006 as a kind of microwave device would be very poor, but this one gets us to something that could be potentially useful,” Prof Smith said. “I think it’s something that a lot of people can build on. Everything in this field is going to come down to what you can make, what you can design. And I think this steps up the design.”