Inching along the path towards the perfect invisibility cloak.

by Tibi Puiu
in News, Physics, Technology
A A

Improving on the design of the famous Rochester Cloak, the first practical invisibility cloak, researchers used lenses to extend the invisibility effect over multiple, larger angles. Previously, the Rochester Cloak could make objects seem invisible over small angles only, and cloaking large objects would be impractical using it.

To make an object seem invisible you need to preserve the appearance that light coming from a distant object has traveled in a straight line, even as the viewer moves. At every depth and every viewing angle, the background must change correctly or the observer will detect that something is wrong.

To accomplish this, the University of Rochester team’s new design uses a commercially available digital camera to scan the background and proprietary algorithms to encode the visual information. The system computes where all of those rays should end up in the future, then displays this information on a display, like an Apple iPad, placed right in front of the object we want to disappear. This is fundamentally different than previous cloaking attempts.

“Many other approaches to invisibility cloaking try to guide light around an object,” said John C. Howell, lead author of the study. “We collect light rays at one position and display them at another position, making everything in between invisible.”

Unlike a single flat image recorded by your camera, the experimental setup encodes the pixel on the screen from multiple angles using lenticular lenses. The cloaking effect works even at an incredible 30 degrees angle.

It takes several minutes to scan and update the background behind the cloaked object, but the researchers claim making it real-time is technically possible, albeit at a lower resolution. For an object to become cloaked, its shape needs to remain fix and not deform.

“Because the views are relatively close to each other it looks like it’s continuous,” said Joseph S. Choi of the University of Rochester. “The views change every half a degree, but in such a small way that it is hard to tell that it changed.”

The practical applications of this kind of cloak may seem obvious, but the researchers aren’t interested in fooling people objects aren’t there. It would be very difficult to conceal an object actively anyway.

Instead, the cloak could be useful in situations where hiding objects that the viewer knows are present is useful. For instance, a surgeon could look at a display and not see his hands, thus enabling the team to have an obstructed view of the operation. You could also place it on a blind spot inside your car so the driver can see through it, or even inside a home to act as a digital window.

“We usually think about cloaking in terms of spies, eavesdropping and Harry Potter’s cloak,” said Howell. “However, there are many situations where we don’t necessarily want to prevent someone from seeing something. Maybe an observer simply doesn’t like how something looks or needs to look through it. We’re not tricking them into thinking it’s not there, just enabling them to not see it.”

The team is also considering to make the cloak flexible so that it could be worn on the body.

“Since we already know what pixel needs to go where even if the detector and display deform or change in some way, making a wearable invisibility cloak is, in theory, possible based on our digital cloaking method,” said Howell. “It would, however, require heavy engineering and a lot of computational power to always know the position and orientation of the detector and display.” 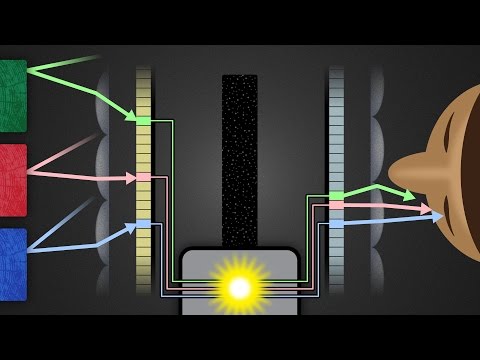