Designs for a device called a “microwave thruster” were proposed in 2006. While the device was physically sound and followed the principles of relativity, it has been dismissed by researchers who claimed that such a functioning device would defy the law of conservation of momentum. A team from NASA set out to trial the device and see if it works; lo and behold – it did! 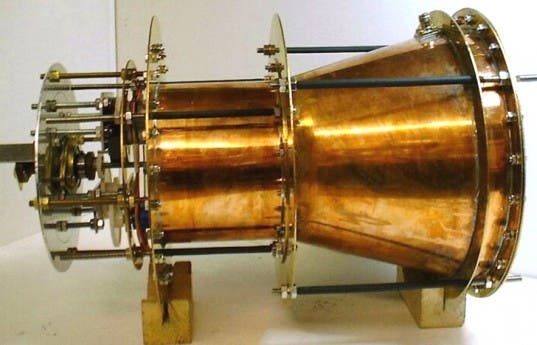 Several years ago British scientist Roger Shawyer presented his EmDrive microwave thruster as an alternative to powering spacecrafts without propellant. Instead, it uses microwaves bouncing off a carefully tuned set of reflectors to achieve small amounts of force and therefore achieve propellant free thrust. Initially, the device seemed theoretically flawed; apparently, it defies the law of conservation of momentum, which states that: In a closed system (one that does not exchange any matter with the outside and is not acted on by outside forces) the total momentum is constant. Basically, if you consider a collision between two objects the forces acting between the two objects are equal in magnitude and opposite in direction. In other words, in order to push something forward, you need to push something backward. No propellant to push backwards, no forward propulsion; the device was deemed flawed, inoperable, and dismissed.

But in 2012, a team of Chinese researchers set out to test the thruster, successfully replicating Shawyer’s project step by step. Not much was published around that, and Western scientists still dismissed it. It took two years for someone to pay attention to this – and it was NASA. The thruster that NASA buikt produced 30 to 50 micronewtons of thrust, which was considerably less than the Chinese team’s reported 720 millinewtons or Shawyer’s 16 to 30 millinewtons, but the principle is the same. As they write in their report, they’re not entirely sure how or why… but it works!

“Test results indicate that the RF resonant cavity thruster design, which is unique as an electric propulsion device, is producing a force that is not attributable to any classical electromagnetic phenomenon and therefore is potentially demonstrating an interaction with the quantum vacuum virtual plasma.” I believe that translates as, “We are not entirely sure why, but it works.”

The implications are incredible, and impossible to grasp at the moment – so for now, NASA chose to focus on the results, and not the method. The implications for long term space travel are amazing; we could forego the need to carry vast amounts of fuel, and instead use solar energy to generate the power to create the microwaves in the first place, meaning that the engine could run indefinitely, as long as it has access to solar energy (or any other star’s energy, if we think in the really big picture). For now however, NASA’s engine couldn’t even propel a peanut through space, but scaling shouldn’t be that much of a problem – as long as they understand why the heck it works!

Could we be dealing with a paradigm shift? Could we be reaching the new stage in space exploration? Like NASA, I have no idea