Universe may be curved, not flat

It is currently believed that we live in a lopsided Universe: cosmologists reached this conclusion by examining the detailed structure of the left over radiation from the Big Bang. Now, two cosmologists presented data which seems to suggest that our Universe is actually curved slightly, in a saddle-like fashion; if correct, their model would invalidate the long standing idea that the cosmos is flat. 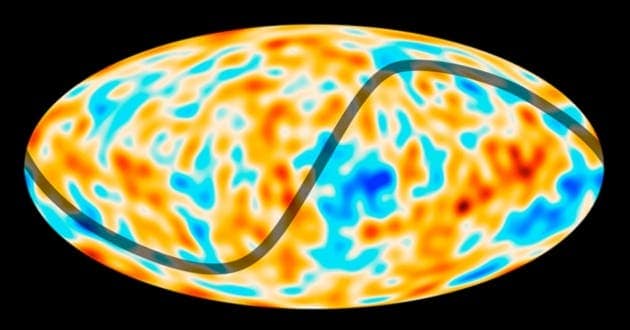 Cosmic microwave background (CMB) is the thermal radiation left over from the “Big Bang” of cosmology. It is fundamentally important for measurements, because it is the oldest light in the universe, dating to what is called the epoch of recombination (the period during which charged electrons and protons first became bound to form electrically neutral hydrogen atoms – so REALLY early). NASA’s Wilkinson Microwave Anisotropy Probe provided the first hints of an Universal asymmetry in 2004, but some believed that was a technological error, and hoped that NASA probe’s successor, the European Space Agency’s Planck spacecraft would fix that error. But as it turns out, the Planck spacecraft confirmed the anomaly.

To explain those results, Andrew Liddle and Marina Cortês, both at the University of Edinburgh, UK, have taken on the gargantuan task of proposing a new model of cosmic inflation – a theoretized period in which the Universe expanded dramatically, growing by a few orders of magnitude in a fraction of a second.

In their paper, published this week in Physical Review Letters, Liddle and Cortês toy with the idea that aside from the initial quantum field (the inflation), there was also a secondary quantum field which caused the curvation of the Universe. The authors’ work is the first to explain the lopsidedness from first principles.

However, the problem is that numerous different measurements suggest that the Universe is flat, some of which can’t be fully explained with this new, curved model. Future improved measurements will likely show which hypothesis is right.

Tags: cosmic microwave backgroundcosmologycosmosmicrowaveplanck spacecraftUniverse
IN THESE TRYING TIMES
Accurate scientific information is more important than ever. We're here to help make sense of it all:
coronavirus and beyond.

A Journey through Multiverses, Hidden Dimensions, and Many Worlds

The alternate world, universe, or dimension is a long-standing element of pop-culture. But these concepts, often conflated, have their roots...

What is keto: the fat-burning diet

What stress is, how it affects us, and how to handle it