The science behind crop circles

by Tibi Puiu
in Science, Studies, Technology
Reading Time: 2 mins read
A A
Share on FacebookShare on TwitterSubmit to Reddit 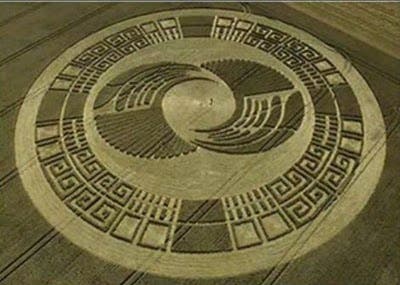 Crop circles have always been an important weapon in any conspiracy theorist’s arsenal, certain to be mentioned alongside UFOs, green aliens or reptilians. Since 1970, tens of thousands of crop circles have been reported around the world, most amateur hoaxes, while some are so intricately built that they even baffle scientists.

In this month’s edition of Physics World, Richard Taylor, director of the Materials Science Institute at the University of Oregon, takes a new look at the mysterious crop circle phenomenon, detailing a bit in his piece how science applies to them. He notes how physics and the arts are coming together to produce more impressive and spectacular crop-circle patterns that still manage to maintain their mystery.

“Crop-circle artists are not going to give up their secrets easily,” Taylor wrote.

“This summer, unknown artists will venture into the countryside close to your homes and carry out their craft, safe in the knowledge that they are continuing the legacy of the most science-oriented art movement in history.”

While it’s unanimously recognized that crop circles are man-made objects, and not UFO formations, some are so incredibly complex and precise, all cut out in an extremely short time, that they still baffle scientists as to how the artists actually managed them. Some of today’s designs are so complex, with some featuring up to 2000 different shapes, that there has to be more going into their production than just boards.

In the past, crop circle enthusiasts would use ropes, boards and even bar stools to form the deceiving patterns, however with the advancement in technology along the year the tools of trade have greatly diversified. Modern crop circle are now precisely drawn to the most complex shape using GPS plotting, lasers and microwaves.

Taylor suggests that microwaves could be used to make crop stalks fall over and cool in a horizontal position – a technique that could explain the speed and efficiency of the artists and the incredible detail in the patterns. In previous experiments, researchers were able to exactly replicate some of the complex crop-circles from around the world using a simple handheld magnetron, readily available from microwave ovens, and using a 12-volt battery.

Matin Durrani, Editor of Physics World, says, “It may seem odd for a physicist such as Taylor to be studying crop circles, but then he is merely trying to act like any good scientist – examining the evidence for the design and construction of crop circles without getting carried away by the side-show of UFOs, hoaxes and aliens