Used sponges are teeming with bacteria. You should better replace them weekly instead of sanitizing them. 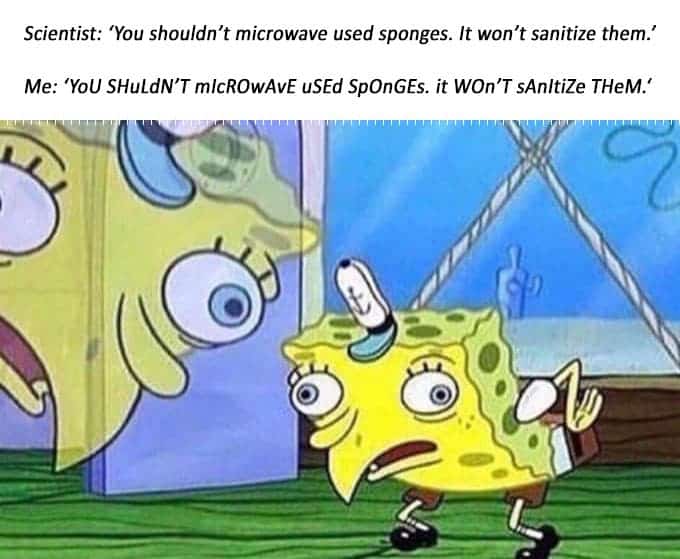 Microbes love wet environments. They also enjoy food — any kind of nutrients will do since they’re not picky at all. This makes kitchen sponges, which stay wet for most of the time and are packed with leftover scraps, excellent breeding grounds for bacteria. This can turn into a serious health hazard seeing how sponges are supposed to clean the dishes and cutlery that we use to eat. Some studies have suggested that households can reduce the risk of hazardous bacterial infections by sanitizing kitchen sponges.

Some studies have suggested that households can reduce the risk of hazardous bacterial infections by sanitizing kitchen sponges. A new study suggests that these methods aren’t really effective — not even microwaving. Instead, households should turn to cheap sponges that they should replace weekly.

Few places, if any, in our home have more bacterial density then the kitchen sponge

German researchers at the Furtwangen University studied 14 used kitchen sponges separated into top and bottom parts. In total, across all household sponges, the scientists found these yielded 362 operational taxonomic units (OTUs), which are pragmatic proxies for bacterial ‘species’.

After sequencing the cultured bacteria, the researchers ended up with 220,000 raw DNA sequences representing  9 phyla, 17 classes, 35 orders, 73 families, and 118 genera of microbes, as reported by Ars Technica. The most prominent bacteria belonged to the Moraxellaceae family. These are typically found on the human skin and previous studies identified them on virtually every kitchen surface that people typically clean using sponges, from fridges to stoves. These are also the same ‘stinky’ bacteria that make dirty laundry smell bad.

Other notable bacterial species were those belonging to the Proteobacteria, Bacteroidetes, and Actinobacteria phyla. Some of these have been previously identified with moderate diseases.

In terms of raw numbers, kitchen sponges are teeming with bacteria. The team led by Markus Egert found bacterial densities as high as  5.4 x 1010 or 54 billion-bacterial cells per cubic centimeter of uncleaned kitchen sponge.

“Kitchen sponges are likely to collect, incubate and spread bacteria from and back onto kitchen surfaces, from where they might eventually find their way into the human body, e.g. via the human hands or contaminated food. In addition, direct contact of a sponge with food and/or the human hands might transfer bacteria in and onto the human body, where they might cause infections, depending on their pathogenic potential and the environmental conditions,” the authors wrote in a paper published in Scientific Reports.

Previously, researchers found sanitation through boiling or microwave treatment can significantly reduce the bacterial load of kitchen sponges. Naturally, people regarded the news as a reasonable hygiene measure, which we also covered in detail in the past. Egert argues, however, that these lab studies do not accurately reflect real use. The few sponges that he and colleagues collected from sponge owners who microwaved or hot-soaped them “did not contain fewer bacteria than uncleaned ones.”

Moreover, the bacterial species from the ‘sanitized’ sponges contained more bacteria related to diseases. That may be due to the fact the surviving bacteria are stronger and once they recolonized the sponge, the whole population was more resistant.

“This effect resembles the effect of an antibiotic therapy on the gut microbiota and might promote the establishment of higher shares of RG2-related species in the kitchen sponges. Although further analyses, including controlled sanitation experiments, are needed to substantiate these findings, our data allow careful speculation that a prolonged application of sanitation measures of kitchen sponges is not advisable,” the authors noted.

The paper highlights the fact that used kitchen sponges contain more bacteria than previously thought. It also shows that the “long term perspective, sponge sanitation methods appear not sufficient to effectively reduce the bacterial load in kitchen sponges.” What Egert and colleagues advise instead is to regularly replace kitchen sponges, preferably weekly.