Something as simple meditation can do wonders.

by Tibi Puiu
in News, Psychology

South Africa is one of the most violent countries in the world. For the sixth consecutive year, murder rates have increased in the country. Crime ranks as citizens’ top concern, second only to unemployment. Witnessing violence can be a severely traumatizing experience and a staggering 25% of South Africans suffer from post-traumatic stress disorder (PTSD), according to the South African Society of Psychiatrists. Adolescents and children in South Africa are particularly vulnerable to PTSD, with some studies estimating PTSD prevalence as high as 38%.

When the environment looks this bleak, solutions are hard to come by, but according to a new study, something as simple as practicing transcendental meditation for three and a half months could do wonders. Thanks to the practice, 34 tertiary-level students at Maharishi Institute (MI) –all of whom were initially diagnosed with PTSD — lowered their symptoms below clinical thresholds as measured by standard assessments. The students also experienced relief from depression.

“A high percentage of young people in South Africa, especially those living in the townships, suffer from PTSD,” said co-author Michael Dillbeck, researcher in the Institute for Science, Technology, and Public Policy at Maharishi University of Management in Fairfield, Iowa. “To become successful students and productive members of society, they absolutely need help dealing with the symptoms of post-traumatic stress disorder. Our study shows, that after 3 months of meditation, this group, on average, was out of PTSD. It offers a way for others to effectively deal with this problem.”

Before the study started, the participants reported severe PTSD symptoms such as nightmares, flashbacks, anxiety, fear, and hypervigilance. Many also reported feeling angry and anti-social and self-destructive behaviors, including violence or abusing drugs and alcohol. If left untreated, PTSD can haunt individuals for their entire lifetimes. Depression and PTSD often go hand-in-hand. 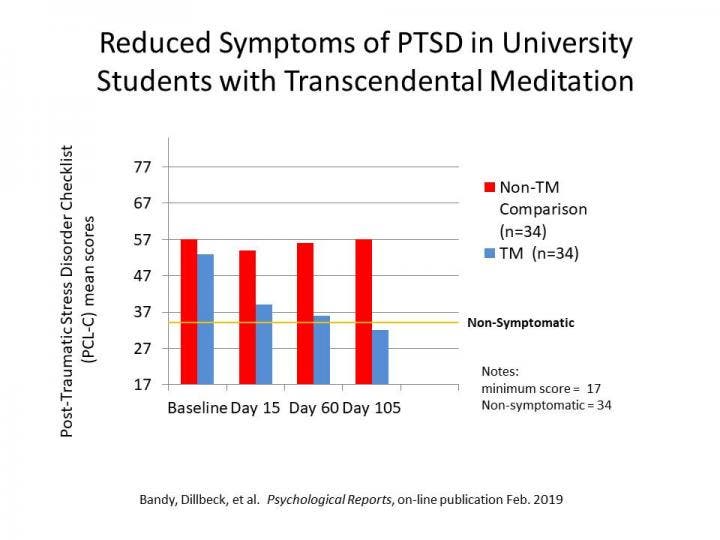 After 15 days, the students’ PTSD symptoms dropped by 10 points on the PCL-C test — a standard clinical assessment where a score of 44 or more indicates likely PTSD. By day 105, the average group score dropped below the PTSD threshold of 34. Meanwhile, a control group of 34 students from the University of Johannesburg (UJ) showed no reduction in depression or PTSD symptoms, the authors reported in the journal Psychological Reports.

“This study shows that there are new tools available for professionals to add to their tool bag,” says Zane Wilson, Founder and Chairman of the South African Depression and Anxiety Group (SADAG).

Previously, a program called Quiet Time involving two daily sessions of meditation helped tame some of San Francisco’s toughest schools. As a result of the program, suspensions fell by 45 percent, while daily attendance rates climbed to 98 percent — well above the citywide average. Grades improved drastically, too. Studies have also shown that meditation acts as a painkiller, improves cardiovascular health, and lowers the need for healthcare.