Scientists scan a woman’s brain during out of body experience

by Mihai Andrei
in Mind & Brain, News, Psychology
Reading Time: 5 mins read
A A
Share on FacebookShare on TwitterSubmit to Reddit

It’s a little out of this world – a psychology graduate student at the University of Ottawa says she can voluntarily enter an out-of-body experience. While scientists are generally skeptical when it comes to this kind of claims, they were thrilled by the possibility to scan her brain during the experience – and the results were indeed spectacular.

Usually, outer body experiences accompany extreme situations – for example a life threatening accident, where one “floats” above his/her body as the doctors are working, it’s usually something along these lines. The experience is also usually attributed to the drugs in a patient’s system, or the hormones released into their system by trauma. 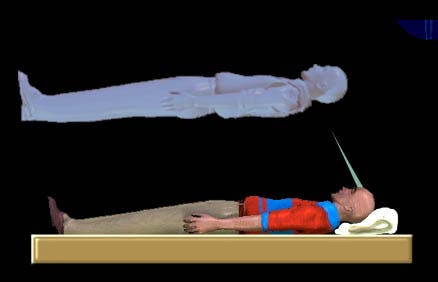 This study passed the peer review and was published in Frontiers of Neuroscience, so it’s not just some shenanigans. Andra M. Smith and Claude Messier from the University of Ottawa talk about how this went:

“She was able to see herself rotating in the air above her body, lying flat, and rolling along with the horizontal plane. She reported sometimes watching herself move from above but remained aware of her unmoving “real” body… “

… and an unusual participant

The participant, whose name was not disclosed, is a right-handed woman, age 24, who was a psychology graduate student at the time of testing. She signed an informed consent approved by the University of Ottawa Research Ethics Board. Her story is a very interesting one: she was in an undergraduate class that presented data on body representation hallucinations in patients that report experiences of their body outside their physical body (Blanke and Arzy, 2005). She spontaneously reported after class that she could have a similar “out of body” experience. She appeared surprised that not everyone could experience this – describing that she developed the technique in kindergarten, trying to find something to do while she was asked to nap. She claimed she believed that everyone can do this, and was surprised to learn that this is not nearly the case.

“I feel myself moving, or, more accurately, can make myself feel as if I am moving. I know perfectly well that I am not actually moving. There is no duality of body and mind when this happens, not really. In fact, I am hyper-sensitive to my body at that point, because I am concentrating so hard on the sensation of moving. I am the one moving – me – my body. For example, if I ‘spin’ for long enough, I get dizzy. I do not see myself above my body. Rather, my whole body has moved up. I feel it as being above where I know it actually is. I usually also picture myself as moving up in my mind’s eye, but the mind is not substantive. It does not move unless the body does.”

The brain, out of the body

So what did the results actually show? Researchers did a fMRI before and after asking her to enter her out-of-body state to find out what that looked like in the brain. They compared these to when she was imagining, but not actually entering, the state. Interestingly enough, the pathway that seemed to be activated during her out-of-body experience is also involved in the mental representation of movements. So basically, when she was “out of her body” and simply imagining this, some of the same pathways were activated – but there were also clear differences.

From a neurological and psychological perspective, this whole thing seems to be a sort of hallucination that she can turn on and off, at will – and researchers are pretty sure about one thing: she’s not faking it. There’s obviously something happening in her brain that is making her experience the world in a different way, stimulating the supplementary motor area, the cerebellum, the supramarginal gyrus, the inferior temporal gyrus, the middle and superior orbitofrontal gyri. Some parts were actually turned down, which is expected with this kind of experience, as shown below:

So what does this mean?

First of all, we shouldn’t be jumping to conclusions. This doesn’t, in an way, imply a paranormal experience. Furthermore, it doesn’t necessarily mean that there is a “soul” which can leave the body at will. So then… what does it mean?

Well, anyone can imagine themselves flying around their body and claim they have an out of body experience. What the researchers went for is figuring out, first of all, if this experience is real and not simulated, and second of all, what happens in the brain during this experience. By comparing her brain activity in all of these conditions they tried to see whether her out-of-body experiences produced detectably different patterns of brain activity than her imaginary movements – and as it turns out, there are major differences.

But this is only one woman’s experience – we need to study more before we draw any definite conclusions. The fMRI revealed changes which are comparable to meditation, so that’s definitely interesting. Is this something more common than previously thought, is it something which can be trained, like meditation? Science – and time – will tell.