Despite Trump, more and more countries continue to ratify the Paris Agreement

It's a small step, but it's a much needed step.

Despite blatant climate change denial from the newly elected US administration, more and more countries understand the urgency of the issue and ratifying the Paris agreement. So far, 139 countries responsible for 82% of the world’s emissions have ratified the pact. 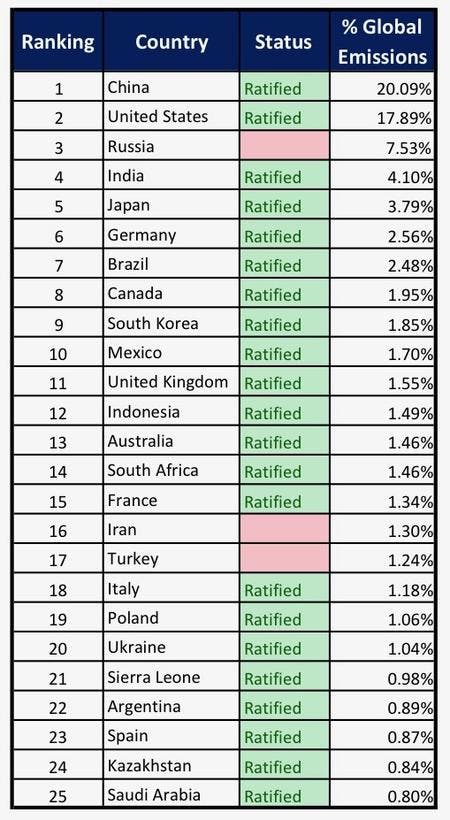 In 2015, world leaders gathered in Paris and decided on an international agreement to curb out carbon dioxide emissions and limit global warming. The agreement signed through a UN framework deals with greenhouse gases emissions mitigation, adaptation, and finance, starting in the year 2020. The agreement entered into force after it was ratified by 55 countries covering over 55% of global emissions.

The US was a key player in the Paris discussions, with then secretary of state John Kerry being one of the most active negotiators and supporters of the pact. But recently, the US did a U-turn and Trump has vowed to destroy Obama’s environmental legacy. Thankfully, countries aren’t falling for that. In the Trump era, 34 countries have formally joined the Paris Agreement. Out of the biggest 25 polluters, just three haven’t ratified the agreement: Russia, Iran, and Turkey.

Just stop and think about this for a moment that the Trump administration wants to pull the US out from the Paris agreement, and is taking steps in this direction.

Out of all the big countries, just Russia (the world’s largest natural gas producer, whose economy is directly tied to fossil fuel companies), Iran (one of the world’s largest oil producers), and Turkey, which is pretty much a dictatorship at this point, have not ratified the Paris agreement — and the US wants to join that list. But there is still hope.

Just last week, the Philippines formally joined the Paris Agreement, after the country’s leader initially called the deal “stupid.” Apparently, after coming into power he understood just how vulnerable his country is to climate change, just like most countries on the globe, and changed his mind. There is a lesson to be learned here, that even stubborn leaders can change their minds when presented with the reality of global warming, and even if Trump decides not to change his mind… the rest of the world is still moving in the right direction. China is taking concrete steps to tackle climate change, becoming the biggest investor in both wind and solar energy, Europe is well underway to achieve their climate goals, and overall, the world seems to be taking much-needed steps towards a sustainable future. Sure, you could argue that it’s not nearly enough, that ambitions are not matched by actions, but for the first time in human history, we have an international framework to tackle global warming — and sticking to it is crucial.