From Paris to Marrakech: The world is taking steps to curb climate change, but it’s not nearly enough

Last year, world leaders gathered in Paris for a UN summit which could be decisive in humanity's history.

by Mihai Andrei
in Environment, News, World Problems
Reading Time: 7 mins read
A A
Share on FacebookShare on TwitterSubmit to Reddit

Last year, world leaders gathered in Paris for a UN summit which could be decisive in humanity’s history. In the French capital, more than 190 countries vowed to slash greenhouse emissions and keep limit temperature rise at 2 degrees Celsius. But while politicians are patting themselves on the back, scientists are getting even more worried because the math simply doesn’t add up. In other words, what countries actually agreed to do won’t be enough.

The UN themselves don’t seem to believe that this is enough. A new report from the United Nations Environment Programme found that the ambitious goals highlighted in the Paris agreement will probably not be achieved.

“It’s just too little, and it’s not happening quickly enough,” said Jacqueline McGlade, UNEP’s chief scientist. “If we don’t see emissions peaking by 2020, then the chances of getting to 1.5 degrees is vanishingly small.” The Paris agreement set the 1.5 degrees bar as an extra, bonus goal — but even that would be devastating.

The fact of the matter is that no matter how we frame it, we’re in a lot of trouble. We’ve emitted so much carbon dioxide (and other greenhouse gases) into the atmosphere for so long, that the inertia of the whole phenomenon has grown tremendously. Even if we stopped emitting everything tomorrow, something which obviously won’t happen, the planet would still continue to heat up somewhat. In realistic scenarios, we need to curb our emissions as soon as possible in order to stay clear of a planet-wide disaster.

Steps are being taken in many parts of the world, yet it’s simply not enough. We’ve waited a long time to act and our energy requirements are growing every day, so while there are numerous laudable initiatives, we still need much more. There’s a gap between what we’re doing and what we hope to achieve.

“We are moving in the right direction: the Paris Agreement will slow climate change, as will the recent Kigali Amendment to reduce HFCs,” said Erik Solheim, head of UNEP, in a statement, referring to the international accord to limit planet-warming refrigerants signed in Kigali, Rwanda, last month. “They both show strong commitment, but it’s still not good enough if we are to stand a chance of avoiding serious climate change.”

Carbon isn’t the only nasty thing in the atmosphere: methane, nitrous oxide, and other greenhouse gases also take their toll, but they’re transformed into carbon dioxide equivalents, for the sake of calculation.

The way things stand now, our carbon budget is about 1,000 gigatons of CO2 equivalents, starting from 2011. Anything over that and the 2C goal will be missed. Of course, the carbon budget for 1.5 degrees is even lower. Our carbon budget for 1.5C might be blown in only five years. Since 2011, we’ve spent about 150 gigatons from our budget, so we still have 85% of it. As of 2014, the world is emitting 52.7 gigatons every year. If we keep it up, we’ll surpass our goal by 2030. If we increase our emissions, we’ll do so even sooner. So then how can we even hope to keep global temperatures from rising? There’s a calculation for that as well.

If we’re to have a chance of fulfilling the 2C goal, the absolute limit is 41.8 gigatons / year by 2030. That’s a 20% reduction, globally, in less than 15 years. When you consider that some parts of the developing world will almost certainly raise their limits, the goal seems even harder to achieve. Which leads us to the next point.

Considering, as mentioned above, that many developing areas will increase their emissions, it’s up to the ‘big boys’ to play the big part. I’m talking about the rich, developed countries. In fact, it could be argued that they also have a moral obligation to do so — they got rich by burning coal and oil, so historically, they are responsible for the most emissions. But who’s that, precisely? 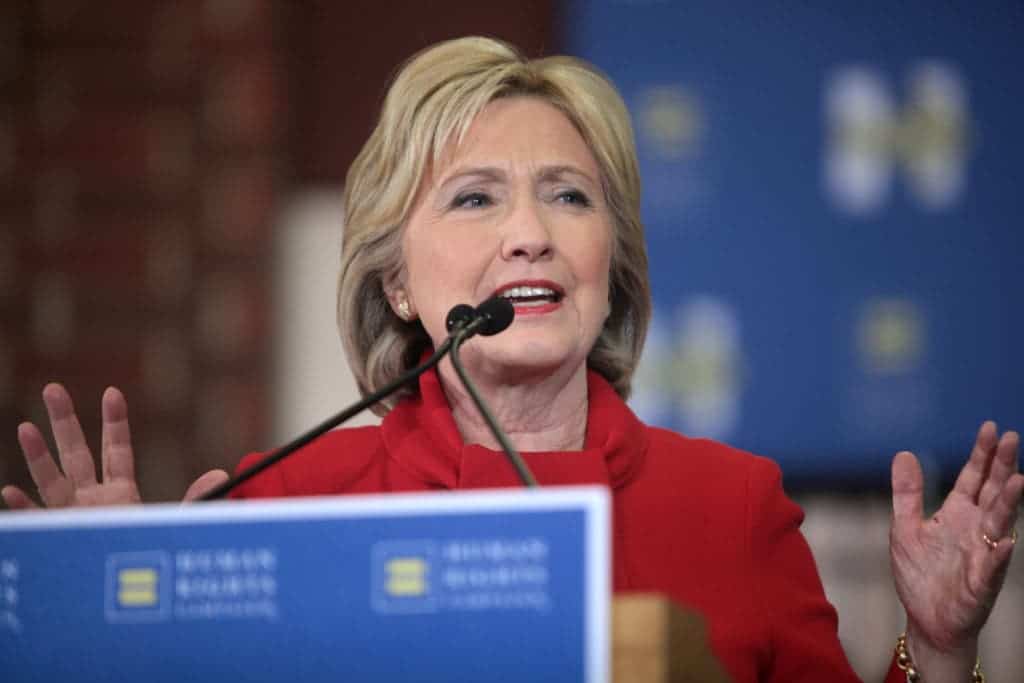 Hillary Clinton or Donald Trump may have a huge role to play in the planet’s climate. Image via Wiki Commons.

The United States is expected by many to become the leader and both President Obama and Secretary of State John Kerry have been strong supporters of the Paris agreement. But as we all know, new elections are just around the corner. Hillary Clinton has also spoken against climate change, but at the same time she has supported hydraulic fracking; and Donald Trump… let’s not even get started. Meanwhile, the UK just lost a trial because it didn’t reduce pollution within its borders and Canadian researchers are appalled by their government’s apathy towards climate change. Sure, all these countries have also taken measures to limit emissions, but none has truly stepped up as a leader.

If anything, the two unlikely players have risen up to the challenge: the European Union and China. The European Union, long seen as a bureaucratic monster, slow to adapt and implement new policies, has signed the Paris agreement en masse and is taking strides towards reducing its emissions by 20% compared to 1990 by 2020. By 2030, the EU has stated its plan to reduce emissions by 30% and obtain almost a third of its energy from renewable sources. Meanwhile China, whom we so much like to hate for being the world’s biggest polluter is on track to exceed its goals. According to officials, China successfully reduced its carbon intensity by 20 percent during the 12th Five-Year Plan period (2010-15), surpassing its original 17 percent target. They’ve even criticized a plan submitted by Donald Trump to back out of a climate agreement, in a highly uncharacteristic comment. Furthermore, if anyone’s felt the effects of pollution and climate change on their own skin, it’s China. But whether or not they can continue economic growth while committing to a sustainable development still remains to be seen.

From Paris to Marrakech

This year, the UN summit will be held in Marrakech, Morocco, from the 7th of November. The past year set the stage and developed the climate pact we needed. Now, as the pact enters into force, it’s time to see facts, not words. It’s time to prove actual commitment and responsibility. I’m not sure where we should expect that commitment from, but it absolutely has to come.

The vows taken in Paris are voluntary and without any repercussions, but ecosystems, people, and society can’t afford to wait any longer. But they will likely have to. Unfortunately, if we want emissions to peak in 2020 and start declining after that, we’ll have to wait a bit more than Marrakech, as the financing for reduction of emissions, mitigation, and adaptation only rolls out in 2020. Furthermore, as it stands, it seems that even if all the vows taken in Paris are somehow respected, the climate is still in dire straits — and that means we are in dire straits. Either way, Marrakech can prove a turning point. Will the world rest on its laurels, even though it hasn’t really done very much, or will it work even harder towards a common goal? We’ll see in the following weeks.