Ocean Warming is Off the Charts

The big news in climate is that 2014 is the hottest year on record - but the bigger picture is even more disheartening: global warming trends have remained constant since 1998, and ocean warming is going off the charts.

by Mihai Andrei
in Climate, News, World Problems
Reading Time: 3 mins read
A A
Share on FacebookShare on TwitterSubmit to Reddit

The big news in climate is that 2014 is the hottest year on record – but the bigger picture is even more disheartening: global warming trends have remained constant since 1998, and ocean warming is going off the charts. 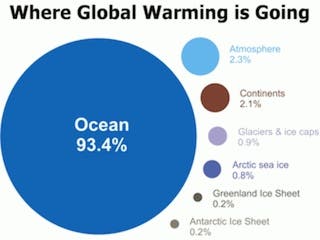 The vast majority of global warming (over 90%) goes to the oceans, and the oceans have actually seen an acceleration in warming in recent years. In other words, our planet’s oceans are warming faster and faster. As climate expert Prof. John Abraham writes in the UK Guardian, “The oceans are warming so fast, they keep breaking scientists’ charts.”

What we are dealing with here is a matter of perception – only 2 percent of climate change goes into the atmosphere, so it’s easy to fall into the trap of thinking that climate change is not accelerating – or it’s even slowing down. But in the meantime, oceans are taking the heat – literally. Sea levels are raising faster than expected, Arctic sea ice is melting faster than expected, and so are the great ice sheets in Greenland and Antarctica. So to say that 2014 is the hottest year on record is not nearly painting the whole picture; 2014 is not a freak year, emerging as the hottest year through some strange chain of coincidences. 2014 is the result of global climate warming more and more year after year.

The rise in temperatures caused by humans hasn’t stopped – it hasn’t even slowed significantly. Sure, there are some small improvements, but when you look at the big picture, things are looking worse and worse. Dr. Gavin Schmidt, director of NASA’s Goddard Institute of Space Studies, tweeted last week.

“Is there evidence that there is a significant change of trend from 1998? (Spoiler: No.)”

He attached this chart, made with data obtained by NASA:

So, there is no global warming hiatus! Nothing has changed, it’s just business as usual for global warming – and business as usual is bad. Our planet is warming up at alarming rates, yet some people continue to bury their heads in the sand and ignore the truth. Meanwhile, the media is missing the forest for the trees, giving the impression that 2014 was a freak year.

“Scientists have long suspected that extra ocean heat uptake has slowed the rise of global average temperatures, but the mechanism behind the hiatus remained unclear…. But the heat uptake is by no means permanent: when the trade wind strength returns to normal –- as it inevitably will –- our research suggests heat will quickly accumulate in the atmosphere. So global [surface] temperatures look set to rise rapidly….”

Yes, it’s likely going to be a kind of “anti-snowball” effect – temperatures will rise, ice will melt, the Earth’s albedo will drop, the CO2 trapped in ice will be freed and reach the atmosphere, temperatures will rise even more, and so on. We should expect more ‘hottest’ records in years to come. 2014 wasn’t an accident, it was a warming. Hopefully, we’ll be able to heed it.