It’s official: 2014 hottest year on record – all without the help of El Niño

At the beginning of the year, ZME Science reported 2014 was the 18th straight year to have surpassed average 20th-century US temperatures and the warmest year yet, according to the Japanese meteorological agency. Now, both NOAA and NASA have confirmed 2014 to be the warmest on record, despite there was no El Niño event.

by Tibi Puiu
in Climate, News, World Problems
Reading Time: 3 mins read
A A
Share on FacebookShare on TwitterSubmit to Reddit

At the beginning of the year, ZME Science reported 2014 was the 18th straight year to have surpassed average 20th-century US temperatures and the warmest year yet, according to the Japanese meteorological agency. Now, both NOAA and NASA have confirmed 2014 to be the warmest on record, despite there was no El Niño event.

What makes El Niño important for the climate is that it raises ocean temperatures, and hence surface temperatures. This happens periodically, and such the event is part of  Earth’s “internal variability”, temporarily shifting heat between the ocean’s surface and depths.  The last five record hot years of 2010, 2005, 1998, 1997, and 1995 were all assisted by El Niño events, yet even though there was no such event in 2014, last year trumped all other years on record as the hottest. As such, 2014 was by far the hottest ENSO-neutral year on record, and the first year since 1990 to set a record without influence from El Niño.The graph below exemplifies. 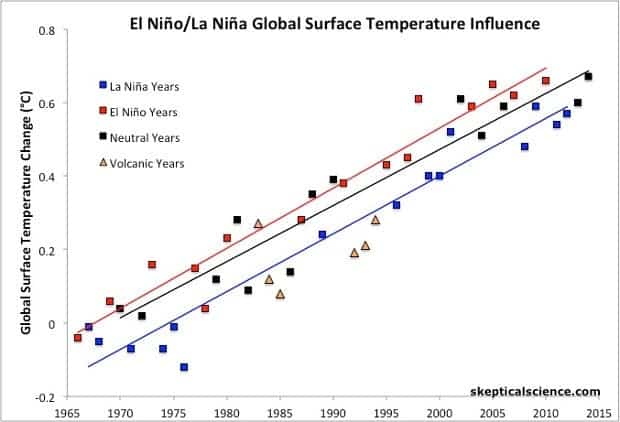 Climate skeptics will be quick to voice, however, that what we’re currently seeing is a global warming “pause”. Over the past 15 years or so, global surface warming has slowed down a bit. This was enough for skeptics to become convinced that man-made global warming is a hoax, and all the warming we’ve been seeing so far is due to the planet’s inherent variability. What they miss is the big picture. This isn’t the first time warming has halted. In fact there are a number of such periods in recent history, but time and time again temperatures have risen over the decades in steps. That’s because the temporary effect caused by a period with a predominance of La Niña events and other short-term cooling temperature influences. The only thing climate change skeptics get right is this: the planet’s climate is cyclic and thus variable. Yet on top of this natural variability, lies an undeniable and unnatural warming trend. Some skeptics between 1970-1978 told us there was no warming, as those from 1985-1997. Would the same people agree now? No worry, with every cycle there will be people with mixed interests that will be quick to deny global warming is happening, not to mention that there’s any human intervention involved. “We’re just too small.” 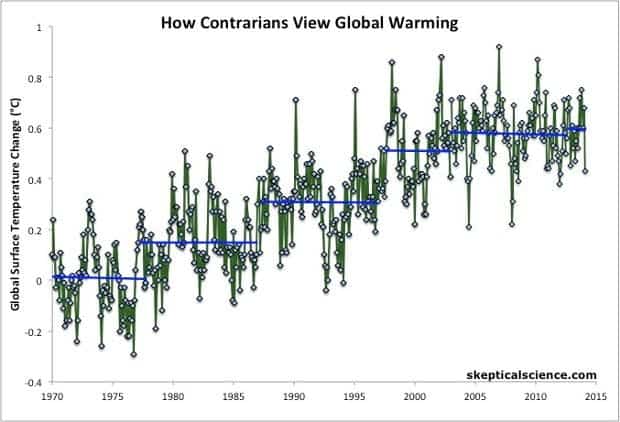 “This is the latest in a series of warm years, in a series of warm decades. While the ranking of individual years can be affected by chaotic weather patterns, the long-term trends are attributable to drivers of climate change that right now are dominated by human emissions of greenhouse gases,”  NASA GISS director Gavin Schmidt said,