Climate change causes penguin colonies to decline by a THIRD

by Tibi Puiu
in Animals, Environmental Issues
Reading Time: 2 mins read
A A
Share on FacebookShare on TwitterSubmit to Reddit

Researchers from the Natural History Museum in Madrid counted chinstrap penguins in Antarctica’s South Shetland Islands in 1991-1992 and again in 2008-2009. They discovered a frightening decline in penguin population in the area, with one species culled by more than a third. 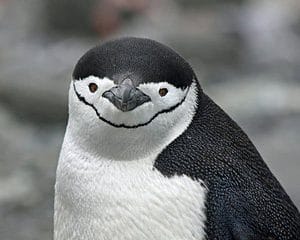 The most affected species at hand is the chinstrap penguin, named so after the black strip of feathers that runs across their white chins. It’s estimated that the chinstrap penguin population has declined by 36% compared to 20 years ago. Researchers involved in the study believe the main cause of the species demise is the unbalancing of the local ecosystem due to the melting of ice, in term a consequence of climate change.

Chinstrap penguin favored dish is a tiny shrimp-like creature, called krill, which attaches to chunks of ice in the Antarctic ocean. Melting ice means less krill, which in terms force penguin numbers to dwindle as a result of a thinner food supply. A similar decline was found in the Adelie penguins, which also eat krill. The findings were presented last month in the journal Polar Biology.

“A more responsible use of the energy and the fossil fuels is necessary to preserve the planet and Antarctica,” lead researcher Andres Barbosa said.

Things aren’t looking too good for Emperor Penguins either. Researchers at Woods Hole Oceanographic Institution (WHOI) claim that the largest sea bird in Antarctica is severely threatened by melting ice, caused by global warming. Emperor penguins breed and raise their young almost exclusively on sea ice. If that ice breaks up and disappears early in the breeding season, massive disruption to breeding may occur.

“Over the last century, we have already observed the disappearance of the Dion Islets penguin colony, close to the West Antarctic Peninsula,” says Stephanie Jenouvrier, WHOI biologist and lead author of the new study. “In 1948 and the 1970s, scientists recorded more than 150 breeding pairs there. By 1999, the population was down to just 20 pairs, and in 2009, it had vanished entirely.”

Using computer models, the scientists predicted that the going rate an 81 percent reduction in the number of breeding pairs is expected by 2100, from about 3,000 to as low as 500. Findings were presented in the journal Global Change Biology.