by Tibi Puiu
in Environmental Issues, World Problems
A A

A bit late with on this story, but considering the importance of this rather unfortunate milestone, it’s best you all hear it again. On the 9th of May NOAA reported CO2 levels of 400.03 parts per million (ppm), which is a level unseen for three million years. This is the first time in human history that atmospheric CO2 has risen past 400 ppm.

Skeptics still accounting these alarmingly high figures to the planet’s natural climate change cycle should take a lot at the charts below. If these aren’t enough we have a list of seven more charts that plainly show the planet is anthropomorphically warming. 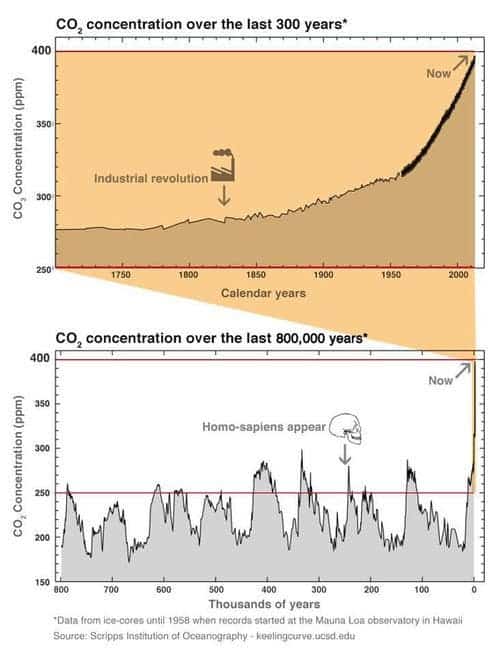 Atmospheric CO2 level readings are made on a daily basis, and this particular one came from the Mauna Loa Observatory in Hawaii, which has been measuring how much carbon dioxide is in the air since 1958. The Scripps Institution of Oceanography puts the milestone in historic context:

“Prior to the Industrial Revolution, natural climate variations caused atmospheric CO2 to vary between about 200 ppm during ice ages and 300 ppm during the warmer periods between ice ages. At the dawn of the Industrial Revolution, around the year 1780, the CO2 concentration was about 280 ppm, so CO2 had already risen by around 40 ppm before Keeling began his measurements. Anyone who has breathed air with less than 300 ppm CO2 is now over 100 years old!”