by Tibi Puiu
in Environmental Issues, Pollution
Reading Time: 3 mins read
A A
Share on FacebookShare on TwitterSubmit to Reddit

A new study published in Environmental Research Letters  ranks the the top seven contributing countries to global warming. Together, these nations account for more than 60 percent of pre-2005 global warming. Before we go on to pointing fingers, it’s important to note that the study incorporates various metrics. This way you can see how each country dumps emissions based on surface size or population. Uniquely, the study  assigns a temperature-change value to each country that reflects its contribution to observed global warming.

When it comes to global warming, there are seven big contributors: the United States, China, Russia, Brazil, India, Germany and the United Kingdom. Sure, at the moment China is the biggest global warming contributing factor in the world, year after year beating its own emissions record. Definitely not something to boast, but historically speaking however the United States trumps all rankings.

The Concordia University researchers, led by Damon Matthews, an associate professor in the Department of Geography, Planning and Environment, used a new methodology to compute the historical global warming trend for each country. Using data from 1750 onward, the team accounted for carbon dioxide contributions from fossil fuel burning and land-use change (deforestation was counted as provoking emissions), along with methane, nitrous oxide and sulphate aerosol emissions. Each type of emission was weighed according to the atmospheric lifetime of the temperature change it caused. 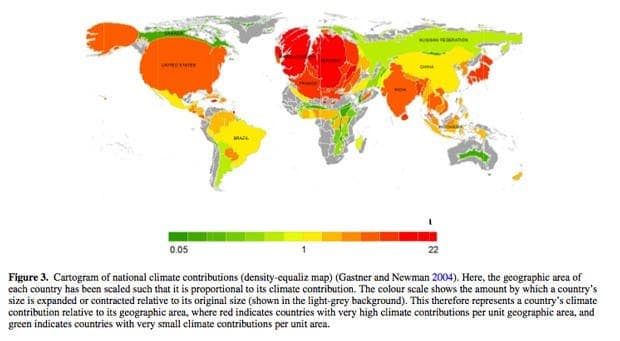 Thus, the U.S. is responsible for a global temperature increase of 0.15 C or close to 20% of all observed warming on the planet. China and Russia account for around eight per cent each; Brazil and India seven per cent; and Germany and the U.K. around five per cent each. Canada comes in tenth place, right after France and Indonesia. While Brazil and Indonesia can’t be considered industrialized countries, their rankings reflect carbon dioxide emissions related to deforestation.

The rich and the poor

When the emissions were scaled to each country’s respective surface areas, Western Europe, the U.S., Japan and India became hugely expanded,  reflecting emissions much greater than would be expected based on their geographic area. China and Russia remained steadfast on their position, suggesting that their historical emissions have been balanced and proportional with their surface size (both countries have immense strips of uninhabitable landmasses at their disposal though). Canada and Australia dropped considerably on this metric, since the countries’ surfaces are much larger than their share of the global warming pie.

Things become more interesting after dividing each country’s climate contribution by its population. Thus the first three global warming contributing countries by population capita are the United States, UK and Canada. In this ranking, China and India drop to the bottom of the list, that numbers 20 greenhouse gas emitting countries. This perspective gives a really nice view on what it really means to be a rich country and what it means to be a poor country. Nowadays, the US has steadily reduced it emissions to 1990s levels thanks to its shale gas boom, cutting coal use. Still, much more needs to be done, and as developing countries massively industrialize to catch up (can you blame them in this current context, considering developed countries are massively responsible for most global warming in the world? Let’s remember Ecuador).

Maybe a more interesting statistic to consider may be that just 90 companies are responsible for 60% of all man-made global warming. List includes: Exxon, Chevron, BP and many more (much oil and gas expected).