Countries need to account for health in all cost-benefit analyses of climate change mitigation.

by Melvin Sanicas
in Environment, Health & Medicine, Science
A A

In a special report on health and climate change, in light of the United Nations Climate Change Conference (COP24) held last week in Katowice, Poland, the World Health Organization (WHO) stated that addressing climate change will reduce deaths caused by infectious diseases.

The latest estimates from leading experts concluded that meeting the goals of the Paris Agreement could save about a million lives globally each year by 2050 through reductions in air pollution. Exposure to air pollution alone causes 7 million deaths worldwide every year and costs an estimated US$ 5.11 trillion in welfare losses globally. Air pollution is the best-known impact of fossil fuel use. Climate change damages health through heatwaves, storms, floods, and droughts, increased spread of infectious disease, and the destruction of health facilities.

Vector control and flooding are also affected by the Paris Agreement and both are factors in infectious disease transmission. Vectorial capacity of mosquitoes that transmit dengue fever has risen by 10% since the 1950s and climate change has led to increased flooding, which can result in unhygienic conditions that increase the spread of infectious diseases. In the 15 countries that emit the most greenhouse gas emissions, the impact of air pollution on health are estimated to cost more than 4% of their GDP (Gross Domestic Product). 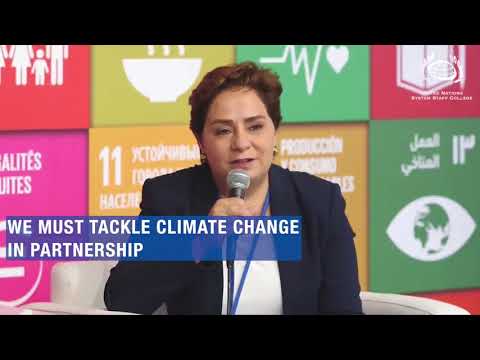 “The true cost of climate change is felt in our hospitals and in our lungs. The health burden of polluting energy sources is now so high, that moving to cleaner and more sustainable choices for energy supply, transport and food systems effectively pays for itself,” says Dr. Maria Neira, WHO Director of Public Health, Environmental and Social Determinants of Health. “When health is taken into account, climate change mitigation is an opportunity, not a cost.”

Thank you @Schwarzenegger for a fantastic talk as always! @WHO is grateful for your strong voice on health arguments in #ClimateAction https://t.co/p6V40uBBKw pic.twitter.com/4rgCHm3b5Y

Global warming also damaged crops and reduce their nutritional value, with the UN Food and Agriculture Organization now reporting a rise in the number of hungry people going up after decades of decline.

WHO’s COP-24 Special Report: health and climate change offers expert recommendations for governments on how to maximize the health benefits of tackling climate change and avoid the worst health impacts of this global challenge. The expert report also indicated that the value of health gains from climate action would be approximately double the cost of mitigation policies at the global level — the benefit-to-cost ratio is even higher in countries such as China and India. Actions to meet the Paris goals would cost around 1% of global GDP. The report calls for countries to account for health in all cost-benefit analyses of climate change mitigation. It also recommends that countries use fiscal incentives such as carbon pricing and energy subsidies to incentivize sectors to reduce their emissions of greenhouse gases and air pollutants.