Putting his money where his mouth is: Gates invests massively into addressing Alzheimer's disease.

by Mihai Andrei
in Diseases, News
Reading Time: 4 mins read
A A
Share on FacebookShare on TwitterSubmit to Reddit

Say what you want about Gates as a businessman but as a philanthropist, he’s definitely putting his money where his mouth is. His latest enterprise is fighting Alzheimer’s disease, which affects 30 million people every year and kills almost 2 million. 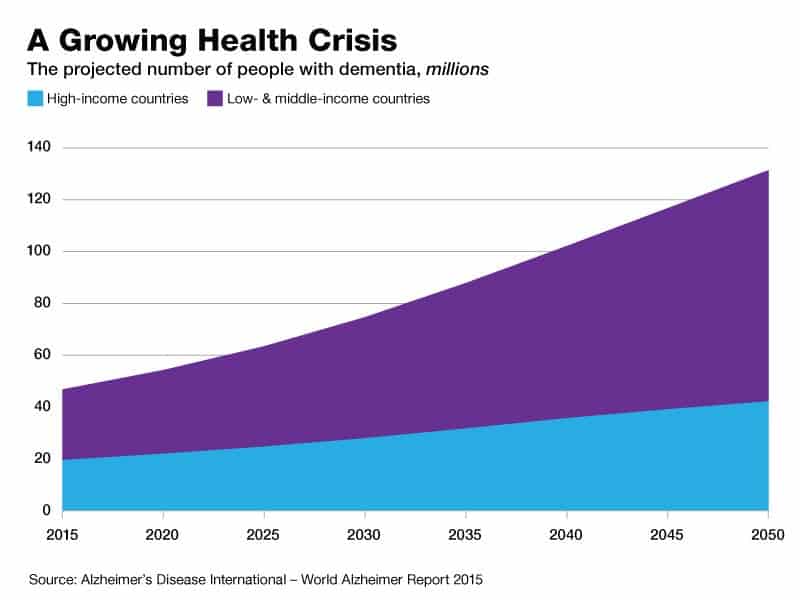 Despite what you may see on the news, this is the best time to be alive. This isn’t saying that everything is peachy in the world — quite the opposite can be said in many areas of the planet — but it is, on average, better than at any point in human history. Thanks to continuous advancements in science, we’re living more than ever. In the developed world, at least, people routinely live to be 80 or even 90 years old. In other words, we’ve pretty much figured out how to make people live longer, though the practices aren’t yet implemented in most parts of the world. But now, it’s time for a new revolution: it’s not only about making people live longer, but it’s more about making sure that they make the most out of those extra years.

“In every part of the world, people are living longer than they used to,” Gates writes on his blog. “Thanks to scientific advancements, fewer people die young from heart disease, cancer, and infectious diseases. It’s no longer unusual for a person to live well into their 80s and beyond. My dad will celebrate his 92nd birthday in a couple weeks, a milestone that was practically unimaginable when he was born.”

“This fact—that people are living longer than ever before—should always be a wonderful thing. But what happens when it’s not?”

Gates was specifically referring to Alzheimer’s. The disease, which causes 60% to 70% of cases of dementia, devastates both those who have it and their loved ones. The most common early symptom is difficulty in remembering recent events, but as the disease progresses, symptoms become much stronger and harder to manage.

The causes of Alzheimer’s are poorly understood, but scientists have seen that the disease is tightly connected to aging. The damage that the disease does is also very difficult to quantify. However, the financial cost is easier to calculate. As Gates explains, Americans will spend $259 billion caring for those with Alzheimer’s and other dementias in 2017. Unless unforeseen advancements take place in future years, that figure will continue to grow.

“I first became interested in Alzheimer’s because of its costs—both emotional and economic—to families and healthcare systems. The financial burden of the disease is much easier to quantify. A person with Alzheimer’s or another form of dementia spends five times more every year out-of-pocket on healthcare than a senior without a neurodegenerative condition. Unlike those with many chronic diseases, people with Alzheimer’s incur long-term care costs as well as direct medical expenses. If you get the disease in your 60s or 70s, you might require expensive care for decades.”

Investing in a healthier future

In the case of Alzheimer’s, just like in most medical problems, hefty investments can not only improve the quality of life for people, but they can also save a lot of money. Gates believes that by investing $100 million, he will be saving mankind much more than that in the long run, in addition to making a positive impact for millions of people. So he’s investing $50 million in start-up ventures working in Alzheimer’s research, and another $50 million in the Dementia Discovery Fund — a fund that brings together NGOs, governments, and industries to provide much-needed investment in innovative therapies and treatment avenues for Alzheimer’s. The main objectives of this investment are:

“By improving in each of these areas, I think we can develop an intervention that drastically reduces the impact of Alzheimer’s. There are plenty of reasons to be optimistic about our chances: our understanding of the brain and the disease is advancing a great deal. We’re already making progress—but we need to do more,” Gates concludes.