What’s the difference between Alzheimer’s and Dementia?

Dementia is a syndrome while Alzheimer's is a disease. More key differences between the two after the jump.

There is often confusion and misunderstanding surrounding the terms Alzheimer’s disease and dementia. Though the two are certainly related there are significant differences that people should know.

Dementia represents “a general term for a decline in mental ability severe enough to interfere with daily life,” according to the American non-profit Alzheimer’s Association. A wide set of symptoms can apply, but there are certain smoking guns, like poor judgment or memory loss. Simplifying things, a disease like Alzheimer’s damages the brain and too much damage will impair its ability to function. This translates to observable symptoms that tend to develop hand in hand as the physiological damage worsens in the brain. It’s this set of symptoms that we refer to as “dementia.”

Alzheimer’s is far from being the sole culprit, though. While Alzheimer’s accounts for 60-70 percent of dementia cases, other causes include Vascular dementia, Parkinson’s disease, dementia with Lewy Bodies and Frontotemporal dementia.

There are around 47.5 million people around the world living with dementia according to the World Health Organization.

The onset of early dementia can be difficult to spot. At first, people can have simple episodes of forgetfulness, which can happen to anyone. These bouts of trouble remembering people and events can persist for a long time though and that’s when it starts becoming a problem. Steadily, people with dementia will find it increasingly difficult to keep track of time or navigate familiar settings.

Confusion and forgetfulness become more prevalent, as well. Ultimately, in the more advanced stage of dementia, most patients become unable to care for themselves.

During the early stages of dementia, there can be some clear differences in symptoms based on the underlying disease. In patients with Lewy Bodies, the second most common cause of dementia, early symptoms are more about lowered attention span, visual hallucinations, and fluctuations in bouts of lucidity and confusion.

Diagnosing the underlying disease, however, becomes challenging as it advances and affects more parts of the brain. These differences become so subtle that doctors can sometimes misdiagnose. Screening methods include blood tests, mental status evaluation and, as of more recently, brain scans. Dementia-causing diseases, such as Alzheimer’s, can only be diagnosed with complete accuracy after death by examining the brain tissue for signs of plaques and tangles.

What is Alzheimer’s disease

Alzheimer’s disease is a brain disorder that affects memory and thinking skills. Symptoms typically develop slowly but progressively get worse over time. Eventually, the disease can disrupt the ability to carry out even the simplest of tasks. Alzheimer’s impact is irreversible. There is no cure.

After a certain age, the human brain starts to shrink considerably but surprisingly not too many neurons die. In the Alzheimer’s diseased brain, however, many neurons stop functioning, lose connections with other neurons, and die.

In the early stage, the damage is confined to the entorhinal cortex and hippocampus. The first functions as a hub in a widespread network for memory and navigation while the latter is one of the most important brain components where long-term memories are stored. This sort of degeneration leads to the memory loss and disorientation associated with the condition though it has to be noted that Alzheimer’s starts damaging brain cells well before the first symptoms kick in.

Later, the disease starts to hit the cerebral cortex responsible for language, reasoning, and social behavior, from where it eventually spreads to other brain areas. 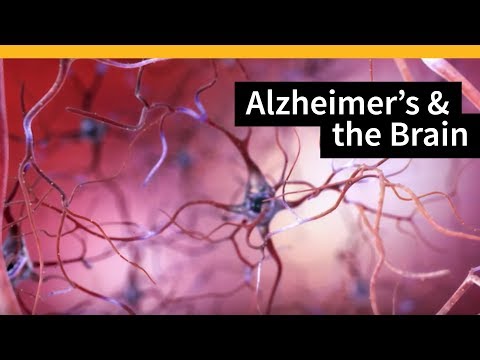 Decades of research show that Alzheimer’s causes molecular and cellular changes in the brain. These are evident in tissue samples collected from deceased patients.

Another notable characteristic is abnormal accumulations of a protein called tau that builds up inside neurons. In a healthy brain, tau normally binds to and stabilizes microtubules, which are internal structures that support the neuron and guide nutrients and molecules from the cell body to the axon and dendrites. Abnormal chemical changes inside the Alzheimer’s brain, however, cause tau to detach from microtubules and stick to other tau molecules. Eventually, these tangle inside the cell blocking the neuron’s transport system.

Alzheimer’s is more common as people grow older but it’s definitely not a normal part of aging. What’s more, you don’t necessarily have to reach a ripe old age to be at risk of Alzheimer’s. Approximately 200,000 Americans under the age of 65 develop Alzheimer’s disease (also known as early-onset Alzheimer’s). In fact, one study found Alzheimer’s can affect people in their 20s.

Those with Alzheimer’s live an average of eight years after their symptoms become noticeable to others, but survival can range from four to 20 years, depending on age and other health conditions.

While there is currently no cure, there are available treatments that can slow the worsening of the dementia symptoms. Scientists are relentlessly pursuing, however, novel treatments and methods to delay its onset and prevent it from developing.

Doctors diagnose Alzheimer’s using a barrage of medical tests, which include:

The most common early symptom of Alzheimer’s is failing to remember newly acquired information. As the disease progresses irremediably, more severe symptoms will crop out such as:

What makes Alzheimer’s particularly stressing, especially for the patient’s family and caregivers, is that patients may not recognize they have a problem.

Since there is no cure for Alzheimer’s, early diagnosis is critical in order to delay the onset of severe dementia symptoms.

Research is making good progress, though, and one day it might be possible to prevent Alzheimer’s altogether. In 2016, scientists at the Baylor College of Medicine, Texas Children’s Hospital, and Johns Hopkins University School of Medicine, inhibited an enzyme which consistently resulted in lower levels of tau in both human cells and fruit flies. Drugs designed to block this enzyme could thus prevent Alzheimer’s from settling in.

Even more remarkably, in 2015, researchers at Midwestern University in Downers Grove, IL, reported in the journal Neuroscience how an intravenous drug reversed the effects of Alzheimer’s in mice.

Neuroscientists Case Western Reserve University School of Medicine discovered that bexarotene, a skin cancer drug, astonishingly also appears to reverse cognitive and memory deficits, commonly associated with Alzheimer’s when tested on lab mice. The drug seems to clear amyloid proteins in the brain, whose build-up is closely related to Alzheimer’s progression. Mice inflicted with Alzheimer’s were given the drug, and all showed clear signs of cognitive recovery.

Other studies, though not as spectacular, provide helpful insight. For instance, one recent peer-reviewed paper found men who frequent saunas are less likely to be diagnosed with dementia later in life. Another correlative study found extra-virgin oil might protect your brain from Alzheimer’s and improves synapses. Olive oil reduces brain inflammation and activates the autophagy process, cleaning some of the intracellular debris and toxins in the process.

Alzheimer’s is still a devastating disease to this moment, unfortunately. Families and friends of patients can at least live with the comfort that countless dedicated professionals are working on ways to curb the disease. Maybe, one day, it’s Alzheimer’s and other dementia that will become a fading memory instead of people’s most precious moments.