Sticks and stones may break your bones but this thing will fix'em right up.

by Alexandru Micu
in Biology, Health & Medicine, News, Science
A A

Researchers at the University of Michigan want to make it possible for doctors to heal large bone injuries using a simple injection.

Large or complex bone fractures are a nightmare to fix for patients and doctors both. They often require grafts and multiple surgeries to properly address, which is a long, expensive, and quite stressful process for everyone involved. So Jan Stegemann a professor of biomedical engineering at the University of Michigan and his team are working on reprogramming progenitor cells so they can be injected directly into a wound and grow into solid bone. Progenitor cells are adult bone marrow stem cells that can differentiate into several functions (i.e. morph into other cell types).

“We’re targeting large, complex defects, where a lot of bone has been lost and the tissue around the bone has been damaged,” Stegemann explains. “These wounds don’t always heal, and they can be highly debilitating. Sometimes the muscle and surrounding blood vessels have been disturbed.”

“There are treatments to stabilize the bone and even fillers you can put in to try to help the bone regenerate, but these options are not suitable in all cases and current treatments are not ideal — they don’t work for some of the most serious cases.”

Right now, the only treatment option for patients with this kind of injury is to receive a graft from another part of their body. For example, doctors will harvest bone from a patient’s hip, crush it up, and plaster it into the wound to help that bone regenerate. It works, but it involves several rounds of surgery (one to collect the material, one to graft it in if no complications arise).

The team wanted to devise a way to actually regenerate living bone, and for that, they needed living cells. You could do it in much the same way as with the bone — graft these cells from other areas of the body and use them to regenerate the bone. However, that still poses the same problems and unpleasantness. What the team did instead was to harvest progenitor cells from the patient, grow them in the lab, and nudge them into creating bone tissue. They are then used like a drug — injected into the damaged area.

This approach, the team explains, is intended to make the cells more likely to survive and regenerate bone where it is needed. Progenitor cells can be “derived from the bone marrow or other tissues” according to Stegemann, “even from liposuctioned fat”.

“You can isolate those cells and then expand their number until you have many multiples of the initial number of cells that you took from the body,” he explains. “You can also treat them so that they form the type of tissue you are interested in.”

The researchers treat these cells with specific biological molecules that make them differentiate into bone cells. Furthermore, specialized biomaterial is used to bind the progenitor cells together and further coax them into creating bone. These “microtissues” as the team calls them are essentially small beads of proteins containing tens to hundreds of cells inside each. The microtissues are meant to feed and promote the survival and function of the cells after they’re transplanted into the bone, as this is a kind of tissue that doesn’t get a sizable blood supply and tends to trigger inflammation in surrounding tissues when damaged. This makes it likely that the injected cells will die or migrate away before they actually begin regenerating the tissue. 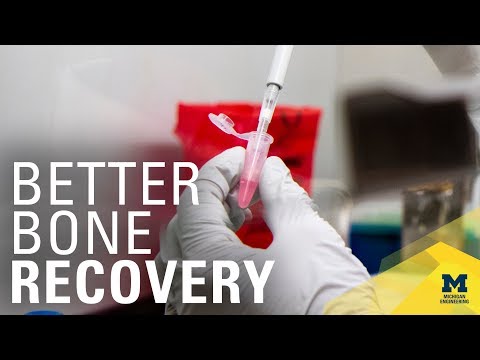 Through the combination of these two approaches, the cells are made to “to really potently regenerate new tissue”. Millions of these microtissues can be produced in a single batch, the team explains. Overall, the end product looks like a slurry — Stegemann likens it to spackling compound that can be used to repair damaged drywall — which is injected directly into the damaged bone. Because the delivery can be performed with a simple needle, there is a good chance that doctors can avoid having to perform a surgery.

Right now, the team is testing their approach on mice.

“The work that we’ve accomplished so far has shown very clearly that our biomaterials-based approach has a lot of merit,” Stegemann explains. “We are able to consistently control cell function and cell phenotype to regenerate tissue types that we’re interested in — most specifically bone right now.”

“We’ve shown that the idea of creating these little microtissues, culturing them outside the body and priming them to regenerate bone before we transplant, has merit as well. And we’ve validated that the culturing process, and delivering them in conjunction with a biomaterial, very significantly increases the amount of bone that you can regenerate.”

The team says that their method can be further developed to work with other types of tissues.